Universal Robots, Bosch, Danfoss, and Festo have all launched new partnerships and collaborations with academic institutions in the interest of bridging the automation skills gap.

Though the use of automated technologies has allowed manufacturers to reduce their reliance on unskilled labor, it has also increased their need for more skilled labor. Industry experts agree that, to overcome this challenge, both on-the-job skills training and improvements to post-secondary technical education will be required.

Remedying this issue is in the interests of manufacturers, local and state governments, and educational institutions alike, as manufacturing is a strong demand multiplier. According to a 2019 analysis conducted by the Economic Policy Institute, the loss of 1,000 jobs from a retail shopping mall could reverberate into 1,221 other job losses up and down the supply chain. However, the loss of 1,000 jobs from a manufacturing operation could result in the indirect loss of 7,441 jobs.

In response, education and training partnerships between the private sector, government, and educational institutions continue to become more common. Below, Automation World has rounded up a collection of some of the most recent partnerships.

The initiative follows The U.S. Federal Advanced Robotics for Manufacturing Institute (ARM) and the Ohio Department of Education's recent endorsement of Universal Robots' products and training curriculum, allowing them to be added to Ohio's industry-recognized credential list, which means that students can acquire college credits for completing the program. According to Corey Adams, channel development manager at Universal Robots, this will allow hands-on robotics courses to be added to classroom curriculum. In addition to boosting institutional confidence that robotics training is recognized by industry as a desirable skill that will lead to career placement, the endorsement will allow schools in Ohio to apply for federal and state funding to acquire cobots. 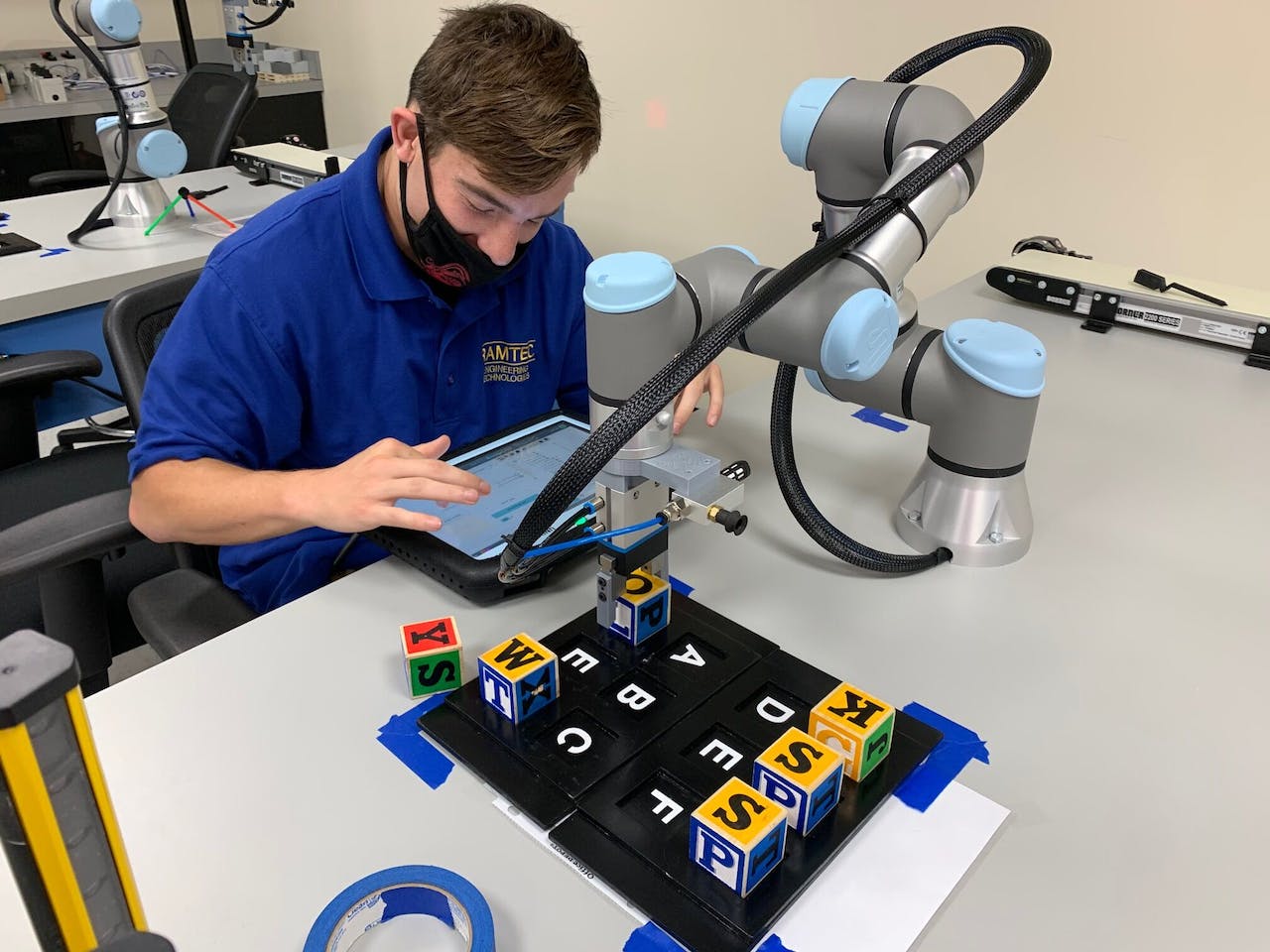 When schools educate students in mastering new technology, they look to validate that the hardware and software they use in the curriculum is relevant to companies employing graduates. Educational institutions also need to ensure that funding for acquiring the classroom technology is obtainable.

ARM is an industry consortium funded by the Department of Defense with members spanning industry, academia, and government. The organization's endorsement program was launched in 2021 in conjunction with RoboticsCareer.org and seeks to accelerate robotics collaboration between educational institutions and the private sector. Through ARM and the Ohio Department of Education, numerous companies in the state, including Tier 1 automotive makers and home appliance manufacturers, vouched for Universal Robots' cobots prior to their being formally endorsed.

“It’s a very rigorous audit that made it apparent that Universal Robots listened and adapted to industry needs," said Brian Wilson, who chairs the education and workforce advisory committee at ARM. “There is a big push for cobots that are affordable, that can easily be redeployed in different applications, and that are for both the large enterprise [and] the entrepreneur. Our endorsement is not just an academic accreditation; we look at whether the program helps the industry educate the workforce they need right now.”

Bosch has announced a new collaboration with Carnegie Mellon University to further research into spatial computing, which includes augmented reality (AR), virtual reality (VR), and extended reality (XR). These technologies are aimed at altering the way workers interact with their physical environment through the overlay of virtual content in their field of vision. As a part of the collaboration, Bosch will invest $3 million in a joint research effort with Carnegie Mellon. In addition, Anthony Rowe will join Bosch as chief scientist of their research team. Previously, Rowe has been involved with the development of Carnegie Mellon's Augmented Reality Edge Networking Architecture, a networking platform with the goal of making mixed-reality digital twin systems easier to program. Rowe is also a professor in Carnegie Mellon's electrical and computer engineering department. 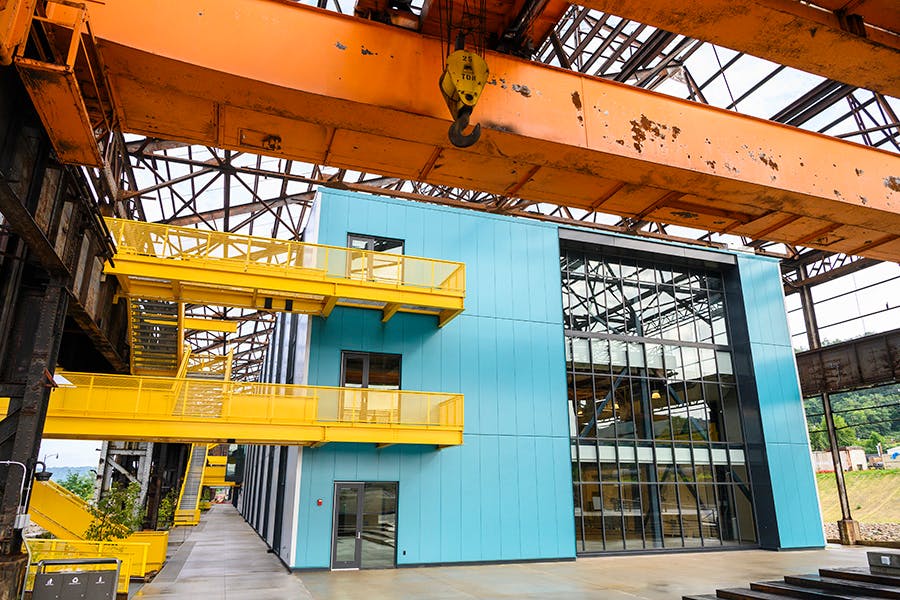 Carnegie Mellon has built a digital twin for the Mill 19, which is known for its historic role as one of the Pittsburgh region’s most productive steel mills and has now been transitioned into a collaborative innovation space for the Manufacturing Futures Institute and the non-profit Advanced Robotics for Manufacturing (ARM).

“While the vision for spatial computing is promising, the reality is that these complex applications are difficult to create and remain largely decoupled from the physical world,” Rowe said.

The goal of the partnership is to design and demonstrate an architecture for XR applications in the context of Industrial Internet of Things while emphasizing safety, reliability, and real-time performance. For example, this will include exploring how a factory equipped with XR could benefit from digital counterparts of workers, machines, and manufactured elements.

“A broad range of new infrastructure and tools are needed to reach the level of robustness required to truly shift VR, AR, and XR from advertising and entertainment to standard practice in the industrial domain,” said Christopher Martin, director of the Bosch Research and Technology Center in Pittsburgh, Pa.

Danfoss has announced a multi-year scholarship fund for faculty and students at FAMU-FSU College of Engineering, the joint engineering institution for Florida A&M University (FAMU) and Florida State University (FSU). The agreement is for five years and establishes $750,000 of committed funds.

According to Ricardo Schneider, president of Danfoss Turbocor in Tallahassee, Fla., Danfoss has been nurturing its relationship with FAMU and FSU for nearly 10 years by funding undergraduate and graduate research projects. The new scholarship fund will focus specifically on underrepresented and minority engineering students.

The fund will give out roughly 10 grants per academic year. Undergraduate fellowships will primarily be awarded to first- and second-year engineering students with an emphasis on first-generation college attendees and those belonging to underrepresented groups. In addition to receiving grant funding, fellows will be given the opportunity to work with selected students from the University of Southern Denmark (SDU) on joint research projects. Danfoss is headquartered in Denmark and has a long-standing relationship with SDU. 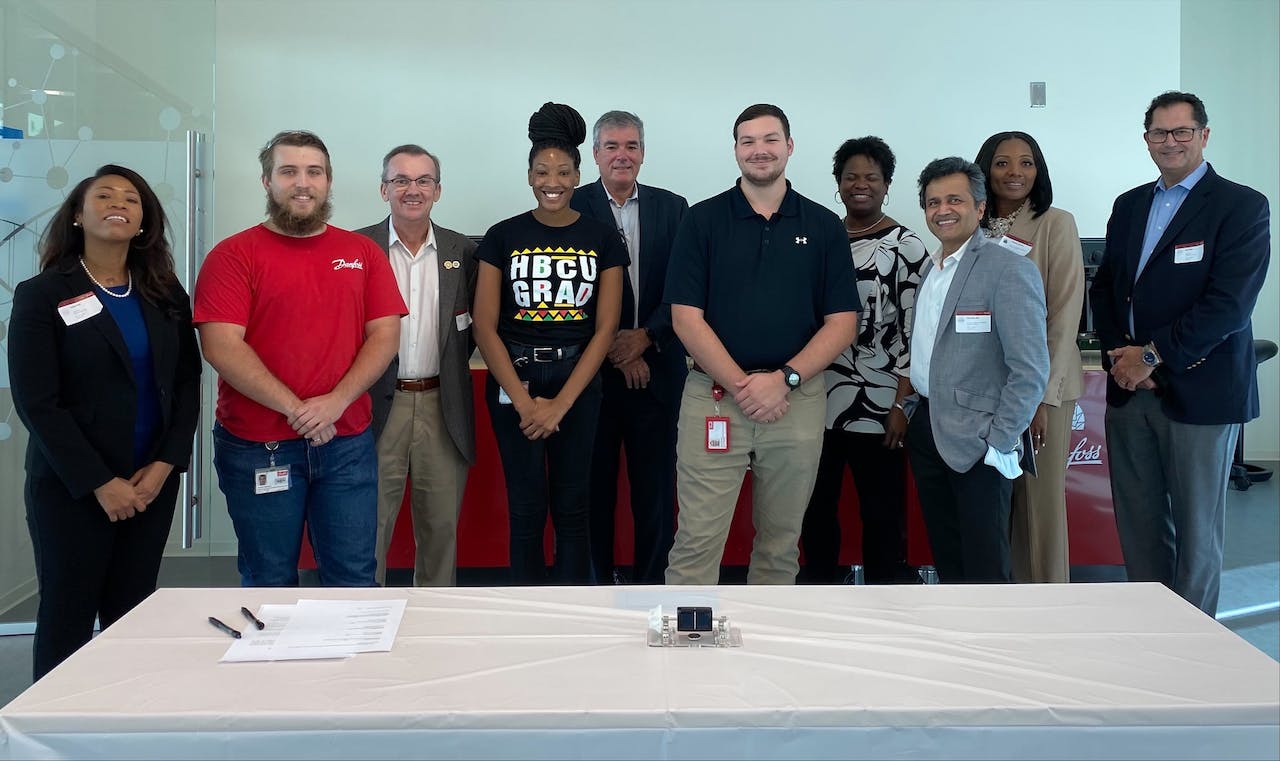 Representatives from Danfoss and FAMU-FSU College of Engineering celebrate the beginning of a 5-year partnership.

“This funding is another important step in the nearly decade-long collaboration between Danfoss and the FAMU-FSU College of Engineering, and it will be transformative in many ways,” said Farrukh Alvi, senior associate dean for research and graduate studies at the FAMU-FSU College of Engineering. “They’re providing financial support to our students who need and deserve it, while also creating a pathway for important research and international career connections that students would otherwise not have access to. This partnership is another notable step toward growing the number of career and research-ready engineers from first-generation and underrepresented groups, a high priority for both organizations.”

“Festo’s cyber-physical training system emulates what it’s like to work in a modern industrial setting,” said Tony Oran, vice president of Festo Didactic North America. “The hands-on experience, with exposure to advanced automation and related technologies, is invaluable for students and anyone looking to upskill in order to qualify for Industry 4.0 careers.” 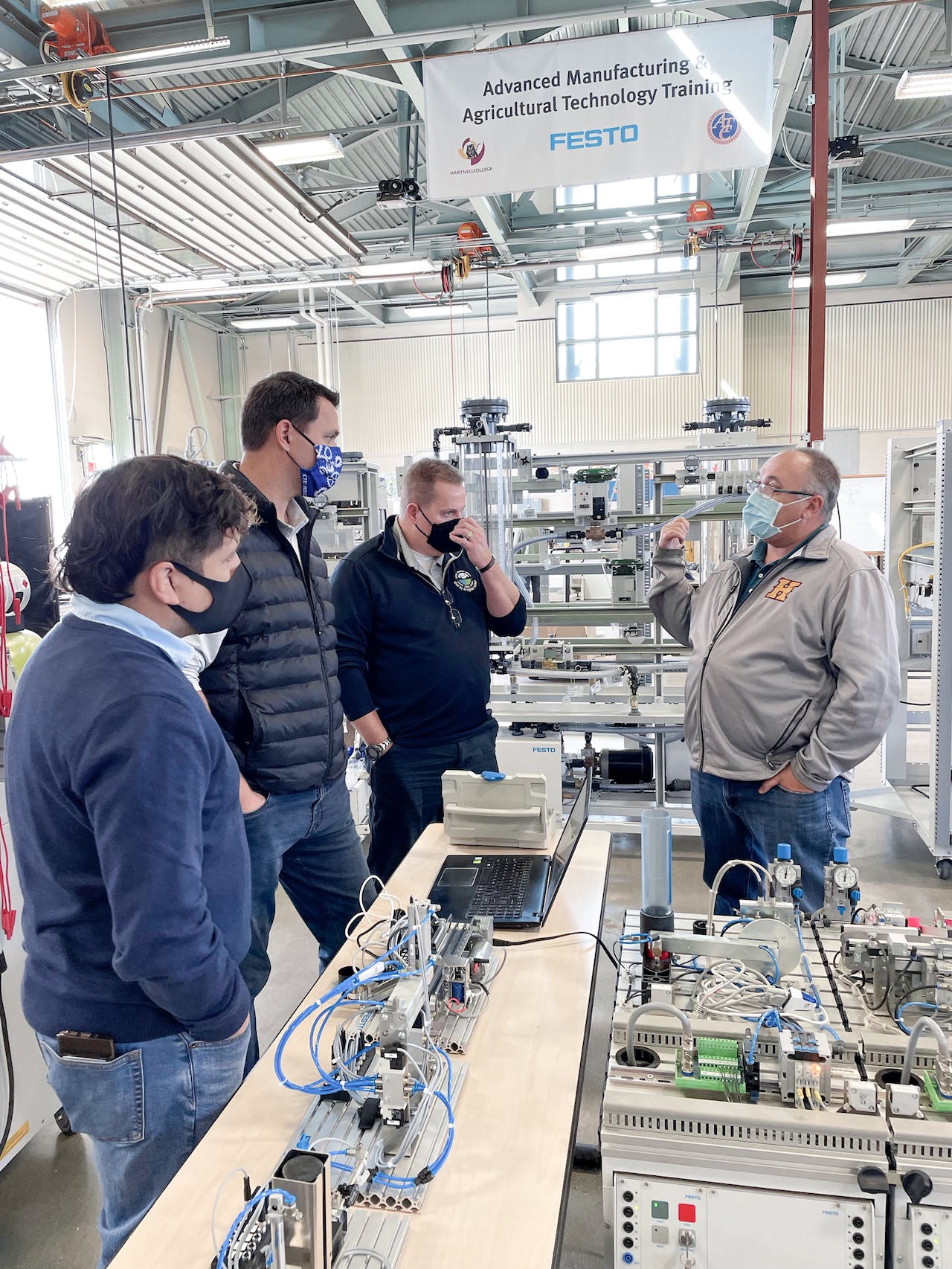 The facility is primarily aimed at preparing students for work in the agricultural sector, which is rapidly adopting many of the same automation technologies used elsewhere in manufacturing. According to a report by Edelman Intelligence and Shell, 45% of farming businesses globally admit they are facing a lack of expertise and training.

Prior to the partnership with Festo Didactic, Clint Cowden, Dean of Academic Affairs for Hartnell College, toured several modern produce processing and packaging facilities to become familiar with the type of equipment that would be needed to provide students with the skills they would need to work in a heavily automated environment.

Hartnell received seed funding for the initiative from Taylor Farms to help jumpstart the program. In addition, Rio Farms has made long-term investments. Going forward, Hartnell intends to expand their educational offerings to better reach middle and high school students as well as those at the college level.

Videos from Festo CorporationView all videos 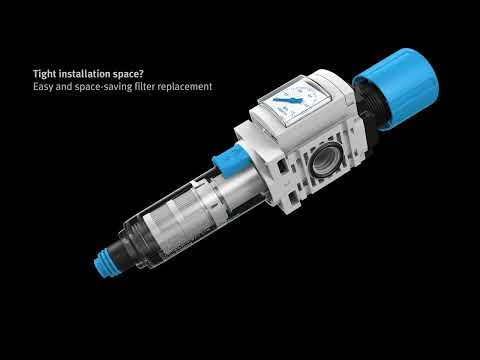 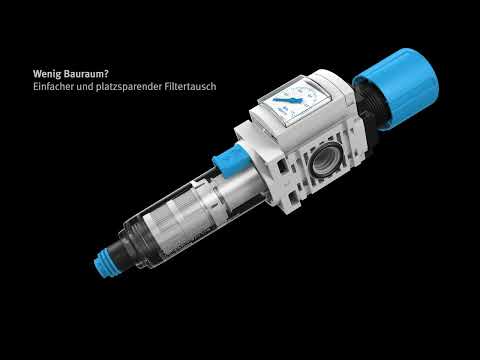 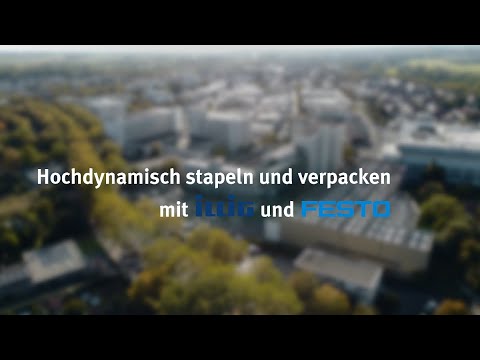 The Non-negotiable Traits of a Successful Salesperson

Creating a Roadmap for Your Career...and Beyond

OEM Magazine spoke with each On the Rise Award winner to learn about the challenges they have faced and overcome.
Natalie Craig
Dec 9th, 2021