An Automation World survey reveals an uptick in cloud and edge deployments as manufacturers roll out performance monitoring, collaboration, quality assurance, and predictive maintenance applications in support of newly remote and distributed workforce.

Chalk up another automation advance brought to you by the COVID-19 global pandemic—an uptick in cloud and edge computing deployments as manufacturers scrambled to keep factory floors running and personnel productive amid a large-scale shift to remote work and limited in-house operations.

According to Automation World’s 2021 Cloud & Edge survey, 62% of companies are currently leveraging cloud technologies as part of their digital transformation roadmaps—a significant bump over the 51% reported in a similar 2019 Automation World survey. Adoption of edge and fog computing technologies also surged since the pre-pandemic research: This year’s survey saw edge computing deployments jump to 55% of responding companies compared to 43% in the prior survey; fog computing’s growth was less substantial, expanding into a quarter of companies surveyed compared to 20% in 2019.

While the global pandemic accelerated digital transformation across the board, it was not a factor in the increased use of edge computing but was an impetus for more prevalent use of fog computing, primarily to accommodate remote management applications. A quarter of manufacturers participating in the survey stepped up their use of cloud technologies over the course of the pandemic to deliver anywhere, any-time access along with real-time monitoring capabilities for critical automation systems and plant floor equipment during a period when many had to limit the number of personnel physically allowed on site.

“When plants were shut down and employees couldn’t physically return to work, manufacturers quickly realized they need to have automation capabilities in place to get facilities back up and running remotely,” says David Breaugh, manufacturing business leader at Microsoft. “COVID also created an explosion in demand to the point where manufacturers didn’t have enough capacity to keep up. They deployed use cases to help improve throughput without disrupting daily operations.” 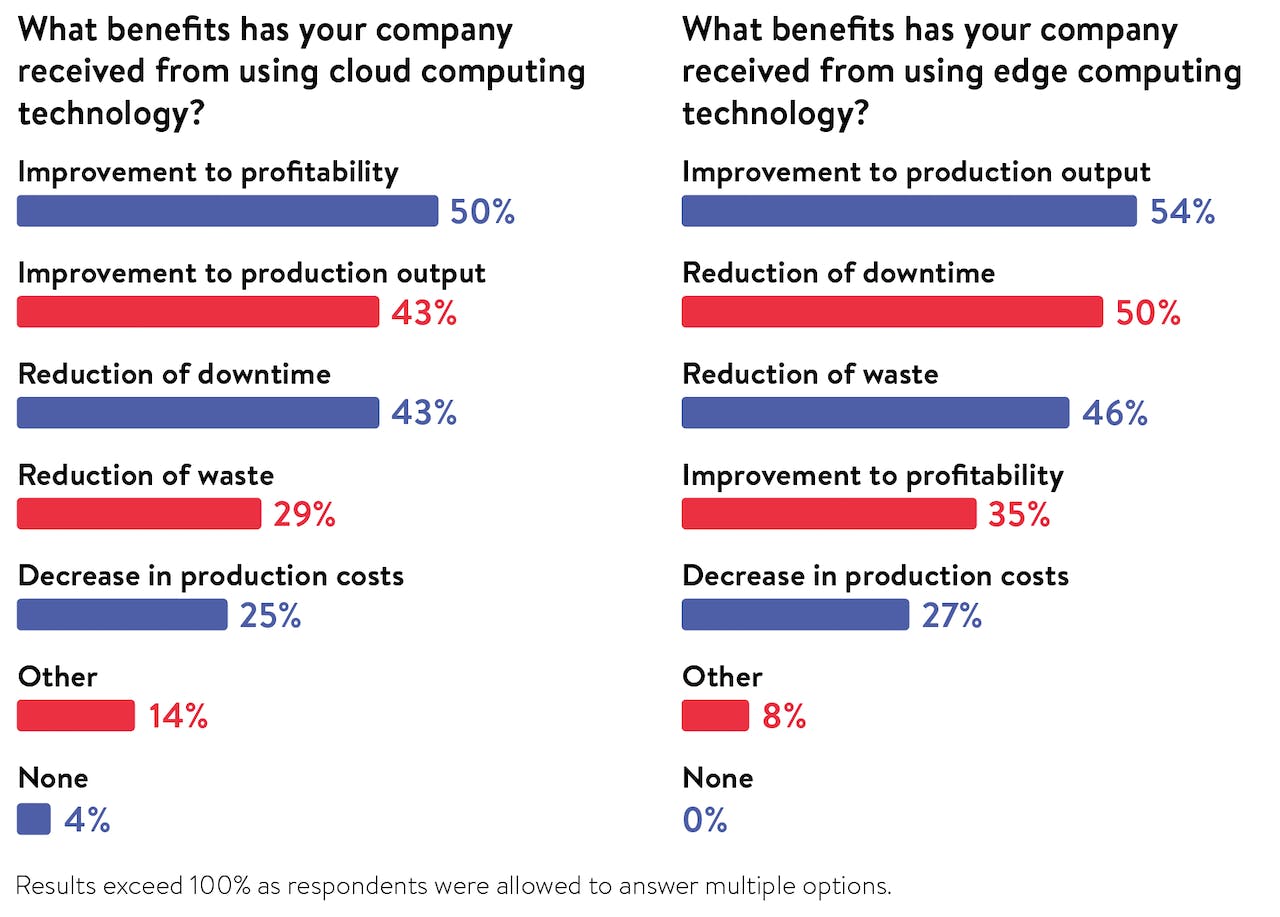 Manufacturers reported a slew of benefits associated with each of the technologies with some notable standouts. For example, cloud computing was more likely to facilitate improvements to profitability (50%) with edge and fog computing associated with boosting production output, cited by 54% and 38%, respectively.

In keeping with the 2019 Automation World survey findings, manufacturers are generally not choosing between computing paradigms. Rather, they are deploying a range of cloud and edge technologies depending on their specific business requirements and business cases and are ultimately leveraging the paradigms as complementary. The key, experts advise, is mapping out an architecture and strategy designed to encompass both. “Where people struggle most is they create an edge architecture and a separate cloud architecture and then try to have them interact and they run into problems,” notes Wes Sylvester, vice president of Cisco’s Industry Solutions Group. “In the same way people talk about the flexibility to scale up and down from cloud applications, you have to build flexibility into your architecture so that data that goes to the cloud today might someday be leveraged on-premises.”

HPE’s Edgeline EL8000 Converged Edge systems is a compact, ruggedized computing system that can be placed in harsh, remote environments.Core Technology Molding Corp., a manufacturer of highly engineered plastic products and tooling designs, credits its investment in the cloud-based DelmiaWorks ERP system, which features a real-time process monitoring capability, as central to keeping operations on track during a period when employees routinely had to work from home. “The cloud enabled work to go on seamlessly and we produced just as many parts and got new customers because of those capabilities,” says Geoff Foster, Core Technology’s CEO and president. “It set us apart from competitors and we tripled our business this year.”

Meanwhile, Emerson saw its customers ramp up investment in the use of sensors and the roll out of edge gateways to augment manual inspection rounds through collection of data and analytics to gauge equipment health and reliability. “Previously, people were looking into automating some manual inspection with sensors and edge gateways, but held back because they thought it was too expensive,” explains Peter Zornio, chief technology officer at Emerson. “Suddenly, they didn’t have people to do inspections, so they didn’t have a choice.”

Siemens also saw an acceleration of projects and deployments across both edge and cloud platforms, according to Bernd Raithel, director of product marketing and deployment of new technologies at Siemens Factory Automation. Customers leveraged edge computing and cloud simulation technologies to do virtual commissioning of machines upfront before they were built and deployed in the field, as well as to allow OEMs or machine builders to remote monitor equipment and send guidance to operators, Raithel says. Other use cases that gained traction during the pandemic included predictive maintenance and anomaly detection applications that leveraged edge computing and analytics in concert with cloud technologies for powering artificial intelligence (AI), including the training of neural networks.

Litmus, an edge-to-cloud industrial IoT (Internet of Things) platform supplier, says its customers are leveraging edge capabilities for data collection and processing, creating local dashboards and KPIs for machine operators and plant floor managers to monitor asset utilization, OEE. They are also leveraging edge applications to facilitate rules-based alerts that indicate machine downtime. With its built-in support for edge-to-cloud data integration, the platform leverages the cloud to aggregate data across multiple plants for deeper analysis of multi-plant performance and for training of AI (artificial intelligence)models, says John Younes, Litmus’s chief operating officer. “We’re offering one platform to do everything needed around data and managing apps and edge systems at scale across many factories, locations, and sites,” he explains. 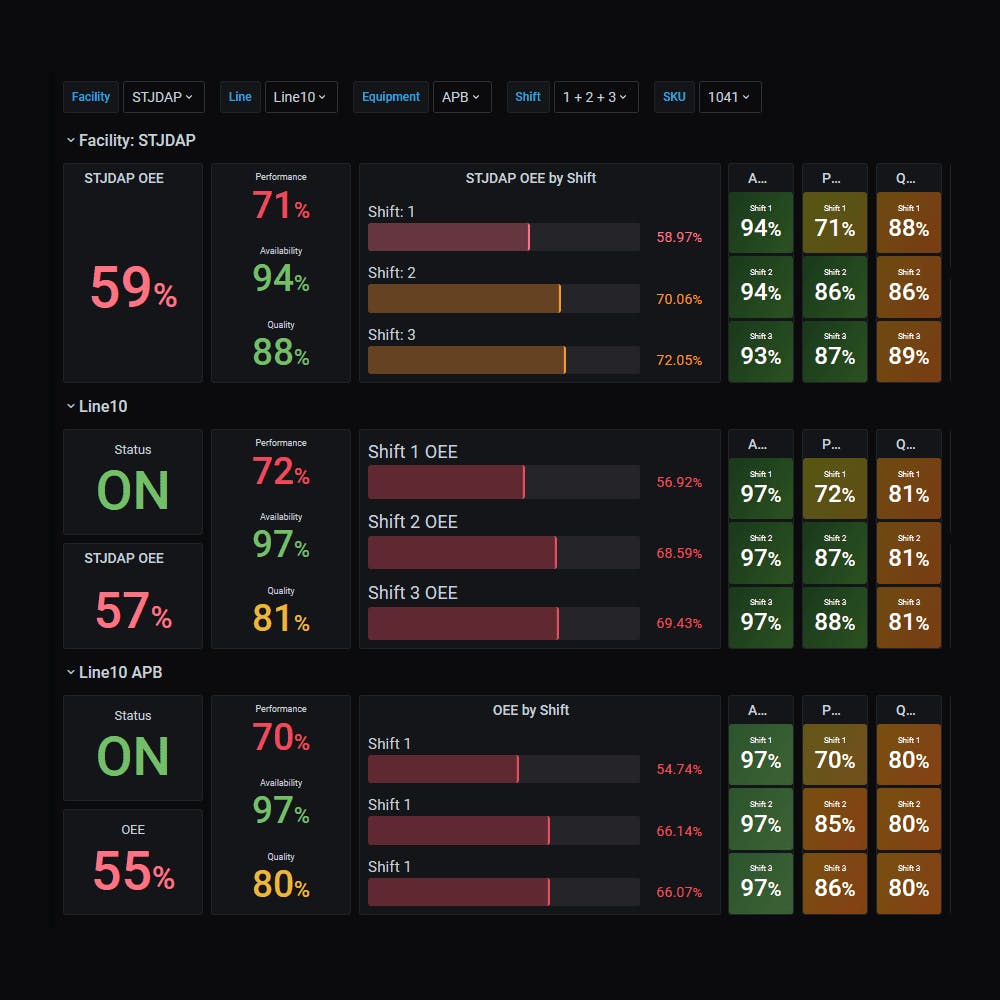 Litmus for OEE is a scalable edge platform that delivers critical data connectivity across assets and data sources to measure OEE and optimize asset performance.Best practices for moving forward
With edge-to-cloud deployment increasingly the norm, organizations need to stop thinking about where to deploy data and applications and instead focus on the business task at hand. As part of any roll out strategy, it’s important to consider the requirements of the process as it relates to cost, security, latency demands, and even the need for a reliable internet connection. From there, it’s all about understanding where data currently resides and what you want to do with it.

“For example, with condition-based monitoring where data is hot and reaction needs to be in milliseconds, the edge is the right location,” explains Bharath Ramesh, head of global product management and strategy, converged edge systems, at HPE. “For applications that are not as time critical, like operational metrics, the cloud is more efficient to get economies of scale.”

It’s also beneficial to embrace the mind set shift that comes with new platforms like the cloud, especially since they encourage greater experimentation. “In the automation world, that’s intimidating because you traditionally have had to spend a lot of capital and do heavy-duty process change to try new things,” says Jason Andersen, vice president of strategy and product management at Stratus. “In the cloud, you have a freer hand to experiment and try new things, which is very liberating.”

In the end, experts say to start with small pilot projects, score some early wins, and move forward from there. Don’t just focus on collecting data from industrial assets—the real advantage comes with knowing what you want to achieve, targeting the right data, and then putting it to work across the edge-to-cloud landscape. “We have tons of data and we don’t know how to leverage it to drive real intelligence,” says Mark Besser, senior vice president of customer success at Savigent. “More data isn’t the answer—it’s about getting access to the right data to solve business problems.”

The Evolution of OEE and Its Impact on OEMs

Hear about machinery for emerging brands looking to make their first inroads into packaging and automation software for not only OEE, but also establishing ROI for C-Suite decision makers.
Sean Riley
Apr 18th, 2022

In response to unprecedented demands on the industry, the most comprehensive packaging and processing show in the world in 2022 gets even bigger.
Sean Riley
Apr 7th, 2022

More than a third of OEM respondents said that 10% to 25% of their sales come from contract manufacturing and packaging customers.
Natalie Craig
Mar 24th, 2022

With two 4-in. heads, this high-resolution system is able to print onto an 8-in.-tall space, directly onto corrugated. In some situations, this could mean non needing to buy pre-printed corrugated cases.
Matt Reynolds
Mar 23rd, 2022