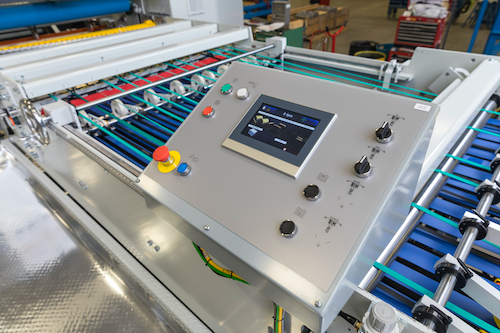 Whether paperboard boxes contain tissues, toothpaste, or taco shells, they must go through many steps to become brightly-colored packages on store shelves. The number of manufacturers involved from shop to shelf increases complexity, so it is important for each company to simplify processes when possible.

BW Papersystems, a Barry-Wehmiller company based in Phillips, WI., manufacturers sheeter machines that are used to unroll and cut reels of paper or paperboard. For the OEM, simplifying the process goes hand-in-hand with reducing downtime for end users, who may print as many as 20,000 sheets per hour then fold them into packages.

BW Papersystems took these factors into careful consideration while designing the eCon Sheeter, a folio-size dual rotary sheeter machine. The eCon processes reels of paper or paperboard at high speed for printers and packaging operations.

“The intention of this machine was to provide industry leading sheet and stack quality at a price that’s competitive with imported machines,” says Jeff Gafner, senior vice president of engineering and service for BW Papersystems.

Cost naturally factors into every new product, but BW Papersystems had an aggressive goal when the eCon Sheeter design process began in early 2013: The machine needed to cost 50% less than the legacy system it would replace. BW Papersystems has customers of all sizes, and while some larger companies might spend more for a feature-filled system, smaller companies often do not have that luxury. “An investment of this size is a significant portion of a small corporation’s capital spending, perhaps for many years,” Gafner says. “These smaller companies are interested in high quality production equipment for minimal capital investment.”

It was also important to create a design that showcased innovation and simplicity, according to Erik Paulson, project engineer for BW Papersystems. “Simplicity in terms of electrical design includes connectivity between the different components and the eventual replacement of components in the field. It also includes the ease of machine startup, such as downloading drive parameters once drives have been installed or replaced,” he says.

This concern extended to simple HMI, especially for smaller facilities that likely do not employ a full-time electrical engineer. The eCon Sheeter HMI needed to support remote access so BW Papersystems engineers would be able to troubleshoot equipment without traveling to the site, which could also mean costly downtime for customers.

BW Papersystems had used Beckhoff Automation controls devices in previous machine designs, and turned to them again for the eCon Sheeter project.

The final machine design delivers simplicity through the automation hardware and software implementation. A Beckhoff CP2907 multi-touch control panel displays the HMI, and any operator familiar with smartphone technology can learn how to use the compact 7-inch touchscreen. In addition, TwinCAT 3 automation software provides an intuitive, open platform that supports remote access and includes diagnostic tools, such as Scope View.

“We have the ability to monitor a multitude of signals, even in the 250-microsecond range, and display them using TwinCAT Scope View,” Paulson says. “We use Scope View frequently to troubleshoot problems or simply to tune the system, and I believe it is one of the biggest selling points of the TwinCAT software platform.”

From running the software to handling motion control for the multiple AX5000 servo drives, a CX2020 Embedded PC with a single-core 1.4 GHz Intel Celeron processor automates the entire machine. The ability to use one controller for PLC, motion control, and HMI was an improvement from previous machines that required hardware PLCs for each function. “Fewer parts typically means improved reliability, especially when motion control is involved,” says Peter Forster, product manager of software and controls for BW Papersystems. “Some of our older solutions used a separate motion controller and PLC, and we still struggle when those stop communicating.”

“We have little extra space on that rack, so without high density I/O hardware, we would have had to redesign the entire cabinet. The EtherCAT Terminal system from Beckhoff was a great space saver,” Paulson says. An industrial Ethernet fieldbus that can communicate with 1,000 digital I/Os in 30 µs, EtherCAT enabled the system to communicate in real-time and provide fast servo loops, ensuring that each device on the network offers high performance, precision, and determinism.

Safety was also important for the high-speed machine that operates large rollers and high-speed cutters. The eCon Sheeter features a comprehensive chain of e-stop buttons and safety sensors around the knife draw, roll cylinders, diverter, and stacker lift, which features an anti-toe-crush perimeter. TwinSAFE terminals integrated throughout the system architecture allow the machine to monitor all pinch points and cylinder hazards. “TwinSAFE programmable safety technology provides the status of each of those contacts to our user interface without any additional wiring,” Forster says.

Even on a machine as large as the eCon Sheeter, it is important to reduce component count and footprint when possible. Compact EtherCAT I/O helped reduce panel size by 50% for some units and closer to 70% for others. The space-saving CX2020 Embedded PC also allows the machine to run a 30,000-line count encoder, which is a functional improvement over the legacy system. Combined with high-performance EtherCAT servo drives, TwinSAFE technology and the intuitive multi-touch HMI that can be accessed remotely using HTML5 technology, the end result offers simplicity without sacrificing innovation for end users. “Simplicity doesn’t mean low tech,” Forster says. “It means that if an operator hits an e-stop and can’t reset the circuit, he can easily find the reason it will not reset using TwinCAT and EtherCAT rather than a stack of blueprints, a voltmeter and a whole lot of knowledge and wasted time.”

The eCon Sheeter project produced an affordable machine with greater functionality that simplifies life for BW Papersystems and their end user customers. It also simplified commissioning for the company by reducing installation times by 65% without any negative effects on performance

New solutions for Industrie 4.0 and IoT

Pharmaceutical companies who react quickest to the packaging needs of an aging population have a unique opportunity to attract long-term brand loyalty, according to PMMI infographic and accompanying white paper.
PMMI
Nov 11th, 2019
PMMI

A panel of small, medium, and large OEMs swapped cybersecurity best practices today at PMMI's Annual Meeting. A common threat that might involve brand owners, phishing, was once considered just a nuisance. But it's getting more sophisticated by the day.
Matt Reynolds
Nov 6th, 2019
More in Business/Management

How to Get More Impact from Your Trade Show Booth Investment

To get the most out of PACK EXPO, marketers should consider these important tactics.
Sep 10th, 2019

Smart technology can help organizations to make informed decisions that can turn a business into a predictor rather than a reactor, if only they know how to use it.
Fortress Technology
Sep 5th, 2019

Workplace shootings continue to increase and turning a blind eye could be a costly and devastating mistake.
Aug 5th, 2019