Public Perception of Manufacturing Appears to Be Changing

A survey from Leading2Lean discovered that Gen Z is interested in manufacturing, signaling the start of a new workforce. 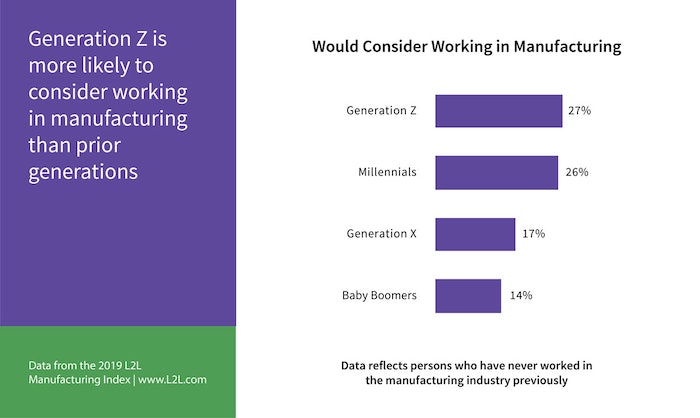 Public Perception of Manufacturing Appears to Be Changing

There is a massive movement underway as the manufacturing community works to change its reputation as a dark, dirty and dangerous place. With a looming skills shortage threatening the future of every segment, companies are doing their best to change the image of the industry via educational outreach efforts.

For example, for years the National Association of Manufacturers (NAM)’s Manufacturing Institute has promoted “Manufacturing Day,” inviting thousands of manufacturers and technical schools around the country to open their doors to parents, teachers and, most importantly, students to show them the reality of modern manufacturing. The goal is to show the next-generation the sophistication and excitement surrounding manufacturing—from rocket launches to augmented reality—and to reinforce the fact that a career in manufacturing is high paying and often does not require a debt-inducing four-year college degree.

Similarly, earlier this month, NAM announced a member-driven campaign to raise at least $10 million for the newly established “Creators Wanted Fund” to inspire and drive more Americans to pursue careers in modern manufacturing. NAM will bring a “Creators Wanted” mobile tour of modern manufacturing to parents and students in 20 to 25 states over 18 weeks, unveil a year-long nationwide digital campaign to recruit new talent to the industry and host a culminating “Making America” Festival in Cincinnati, Ohio in September featuring interactive exhibits, thought leadership forums and entertainment and to showcase the future of modern manufacturing in America. The campaign aims to cut the skills gap by 600,000 workers by 2025.

It's hard to measure whether these programs are making a difference, but according to a recent survey by Leading2Lean (L2L), a provider of cloud-based lean manufacturing software, the industry effort seems to be paying off.

The 2019 L2L Manufacturing Index, an annual measurement of the American public’s perceptions of U.S. manufacturing, found that adults in Generation Z (those aged 18-22) are 19 percent more likely to have had a counselor, teacher or mentor suggest they look into manufacturing as a viable career option when compared to the general population. One-third (32 percent) of Gen Z has had manufacturing suggested to them as a career option, as compared to only 18 percent of Millennials and 13 percent of the general population.

“For many years, manufacturing has struggled to introduce and entice new workers to the industry,” said Keith Barr, president and CEO of L2L.“The industry has failed to compete with technology for their interest. Unfortunately, the industry hasn’t fully explained the dynamic, technology-driven environment of the modern plant floor.”

Unfortunately, misconceptions about the industry persist. For example, the 2019 L2L revealed that over half (53 percent) of the general population assumes the average salary of a mid-level manufacturing manager is under $60,000. In reality, the average salary for a manufacturing manager in 2018 was $118,500, according to an IndustryWeek salary survey.

“With Gen Z we have an opportunity as an industry to build a new workforce, but it will be a challenge that the industry is going to have to take seriously in order to get their attention and participation,” said Barr.

In fact, Barr suggests the industry take a bigger step beyond working on its image and actually innovate operations to utilize the skillsets of these digital natives. “We know that the workforce crisis is a top concern with a majority of manufacturers. Instead of hoping new workers will appear, the industry needs to make changes that will attract the workforce. Gen Z is incredibly tech savvy. The industry needs to consider developing and deploying plant-floor technology that utilizes gamification and transparency to take advantage of Gen Z’s unique skills. The greatest opportunity for manufacturing is to have an engaged, empowered workforce that is constantly innovating.”

CPGs Lean on OEMs During the Pandemic

See the PACK EXPO Connects 2020 Sunrise Breakfast Kickoff with Dr. Kim Houchens, Director, Customer Packaging Experience at Amazon as she takes your through all the touches your e-commerce package has to survive!
Nov 20th, 2020

Rarely does an entirely new industry emerge in packaging and processing, but the legalization of cannabis for medical and adult-use did just that.
Nov 19th, 2020

The virtual world is creating new end user expectations around how products are delivered and serviced, requiring OEMs and technology suppliers to partner in new ways.
Stephanie Neil
Nov 16th, 2020

The November 2020 issue of Packaging World will have landed in your mailbox about a week after the industry’s most engaging 2020 event, PACK EXPO Connects from PMMI Media Group (PMG).
Matt Reynolds
Nov 14th, 2020

A changeover that would take one hour in a conventional vacuum conveyor takes only 10 minutes in the company’s new vacuum conveyor.
Natalie Craig
Nov 13th, 2020
Home

Sentient is a human term, which means to feel and perceive.
Natalie Craig
Nov 13th, 2020
Home

RSC Case Erecting and DRC Case Forming in One Machine

Fallas combines the features of its case erector for pre-formed, pre-glued cases with its plunge-style case former for flat blanks to enable RSCs, Display Ready Cases, beer trays, and other case/tray styles to be created on one machine.
Anne Marie Mohan
Nov 12th, 2020

Opportunities for Robotics in Omni-Channel Fulfillment

Fanuc shares stats on e-commerce growth as well as provides insight on the opportunities for using robotics in a number points along the logistics supply chain.
Anne Marie Mohan
Nov 12th, 2020

With the open standard of the IO-Link interface, integration options are available for machine control from a variety of providers.
Stephanie Neil
Nov 12th, 2020

While both machines operate independently, and bag lengths, temperatures and speeds are independent of one another, they operate hand-in-glove with the top machine cutting off sealed bags into the top of the forming tube of the second machine.
Matt Reynolds
Nov 12th, 2020

Examining different causes of downtime, and employing the right automation to get to the root cause.
ITW Hartness
Nov 12th, 2020