For robots and cobots, designed to integrate directly into the joints and record each revolution of the instrument, with or without an external power source. 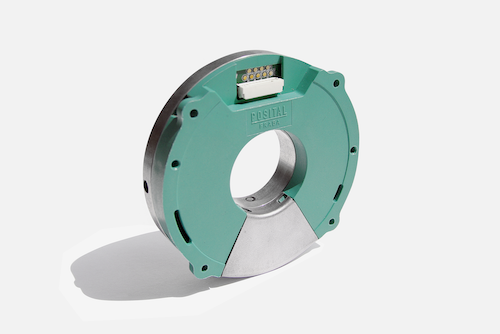 Posital, the branch of Fraba that supplies designs and markets sensors for motion control and safety assurance systems, has released its multiturn Hollow Shaft kit encoders. They feature an integrated rotation counter that is designed to record each revolution the instrument experiences, even if these occur when no external power is available. Power for the counter circuitry is meant to be supplied by Posital’s Wiegand energy harvesting system, in an attempt to eliminate the need for backup batteries or complex mechanical systems.

The Hollow Shaft kit encoders are meant to be well suited to robots and cobots. Weighing in at 110 g, with an outer diameter of 80 mm, these devices are designed to be integrated directly into the joints of the robot arms. Their open-center form factor should leave room for designers to route mechanical components, cables, or pneumatic/hydraulic lines through the center of the joint, according to the company. The encoders’ slim design (17.8 mm deep) and large central opening (30 or 50 mm) are designed to make them applicable to servomotors and drives. Installation and commissioning are made to be straightforward without complicated calibration procedures.

The Hollow Shaft series represents a deliberate break with the past. Says the company, magnetic systems typically require that key components be placed on the centerline of the device, which makes it difficult to adapt to hollow shaft configurations. The capacitive measurement technique is meant to enable a ring-shaped form factor, while also offering reliability and precision (18-bit electronic resolution and an accuracy of ± 0.02 degrees) at a moderate cost.

Capacitive encoders have two key components, a rotor and a stator. These function as plates in a capacitive system. Capacitive coupling between the plates changes as the rotor turns relative to the stator, varying the modulation of electrical signals transmitted through the system. A sophisticated signal processing system analyzes these changes in signal strength and phase angle to precisely determine the angular position of the rotor relative to the stator. This system integrates capacitive effects around the full circumference of the ring-shaped components, so that measurements are largely insensitive to dust, moisture of minor misalignments.

The self-powered multiturn system uses Posital’s Wiegand energy harvesting technology. For most applications of this technology, the Wiegand wire assembly and rotating magnet that triggers energy production are both located on the device’s center line. However, for the open-center hollow shaft layout, Posital says a new set-up had to be developed. Through experimentation and extensive magnetic field simulation, they developed a four diametrical-oriented system with magnets placed evenly around the rotor. These four magnets are meant to provide a stable magnetic field that triggers polarity reversals in the Wiegand sensor installed in the stator. With each 360-degree rotation of the rotor, the Wiegand assembly should generate a current pulse to energize the counting electronics. The multiturn counter has a 43-bit memory for a measurement range of almost nine trillion revolutions.

As the generational workforce shift looms with more than 2.7 million baby boomers preparing to retire, OEMs need to bridge the generational divide, retain tribal knowledge, and ensure a lasting legacy. Here’s how to do it.
Natalie Craig
Dec 12th, 2019

Learn what Vision 2025 participants at PACK EXPO Las Vegas had to say about improving asset reliability in their organizations, and where they are on the road to continuous improvement.
Kim Overstreet
Jan 10th, 2020

Supply chain and logistics professionals will be focusing on labor issues and new technology in 2020, particularly those that improve safety and efficiency.
Kim Overstreet
Jan 7th, 2020

Paraflex Couplings from Miki Pulley has a maximum torque of 25 Nm and allows angular misalignment up to 4°.
Miki Pulley Industrial Brakes
Dec 25th, 2019

From material handling to pick-and-place, innovations are aimed at agility and mobility in packaging applications.
Aaron Hand
Dec 3rd, 2019
More in Home

Pneumatic Function Integration on One Controller

Though Festo first released its Motion Terminal two years ago, it continues to develop software upgrades that expand its range of capabilities.
Sep 26th, 2019