In addition to its anniversary, Sonics names Lauren Soloff as the company’s new president. 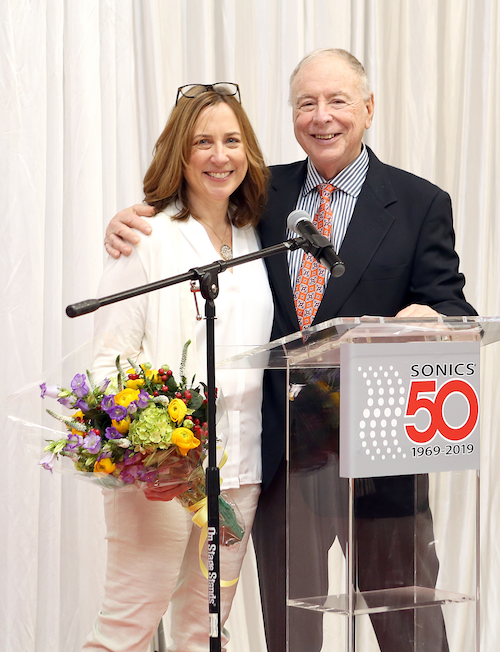 Sonics & Materials, Inc. celebrated its 50th anniversary with a gala luncheon on April 5 at their headquarters in Newtown, CT.

Sonics & Materials, Inc. was started in 1969 in Danbury by Robert S. Soloff, founder and ongoing CEO, and has been located in Newtown for the last 21 years.

At the luncheon, Robert Soloff announced that his daughter, Lauren Soloff, who joined the company in 1995–and is currently Executive Vice President—will be assuming the office of president, while he will be continuing in his role as CEO.

Over the past 50 years, Sonics acquired a total of 30 patents—plus 3 pending—for technological innovations, including one this past year for break-through hermetic cross seals on gusset bags and stand-up pouch side seals.

These innovations continue the work started by Robert Soloff, who was awarded the original patent for the ultrasonic method of welding rigid thermoplastic parts. This groundbreaking assembly technique is now used universally across many manufacturing sectors, especially the automotive, aviation, medical device, electronics, appliance and battery industries.

In his remarks, Robert Soloff noted the myriad ways in which the simple sound waves at the heart of ultrasonic technology are used today.

“I like to think of our company as a symphony orchestra where everyone has their part, and together we make beautiful music and produce world class ultrasonic products,” Soloff says. “Our music, however, is mostly in the 15 to 40 kHz range.”

The company was joined in its celebration, which also coincided with Bob Soloff’s 80th birthday, by several local, state and federal officials, and included remarks by Attorney General William Tong and Newtown First Selectman Dan Rosenthal, as well as the presentation of proclamations and certificates of recognition.

Last week, Sonics was featured as Senator Murphy’s “Monday Manufacturer,” where the senator was quoted as saying:  “I’m happy to highlight Sonics & Materials’ 50 years of service to the manufacturing sector in Connecticut and their commitment to training the next generation of students in the ultrasonics field. Their hard work goes a long way in ensuring Connecticut manufacturing remains competitive.”

A popular topic in the remarks was the importance of manufacturing companies and their contributions to Connecticut’s economic growth.  In addition to providing jobs and educating its skilled work force in the specialized field of ultrasonic technology, Sonics offers tuition reimbursement and work study programs to students in local and state technical schools and university programs.

“I look forward to continuing our history of innovation … to developing more high-performance ultrasonic solutions for our customers’ varied applications, while continuing to provide them with the kind of service and sup-port that can transform their business,” says Lauren Soloff. “I appreciate the trust my father has shown me, as well as the hard work and support of all the Sonics’ employees who have brought us to 50 years of success.”

OMAC, The Organization for Machine Automation and Control, has formed a Workgroup to be comprised of end users and service providers to create a comprehensive best-practices handbook for remote monitoring services.
PMMI, OMAC
Jun 29th, 2020

Hershey's Unwraps their COVID-19 strategy with employees and suppliers

Hershey’s Josh Becker sat down with PMMI’s Sean Riley to talk about a customer’s perspective on how Hershey is handling visits from suppliers, training and service issues.
Sean Riley
Jun 25th, 2020

Hershey's Expectations for Suppliers during COVID-19

Hershey's Josh Becker explains how the chocolate giant has adapted and what it expects from visitors to its facilities.
Sean Riley
Jun 19th, 2020

Closing the Loop Between CAD, PLM, Digital Twins, and the Cloud

What does back to work look like for field service technicians who are heading back out into the field?
Sean Riley
Jun 16th, 2020

Software as a Service Enters Engineering and Manufacturing Circles

Typical industry training will be anything but typical as companies pivot to fit new safety guidelines.
Sean Riley
Jun 9th, 2020

Research shows that businesses with gender diverse leadership teams have better results. So why are there so few women in the C-suite?
Stephanie Neil
Jun 5th, 2020

Vice president of safety shares the global policies that have helped Amcor's 35,000-plus employees return to work as safely as possible.
Sean Riley
Jun 5th, 2020

The automation supplier went back to the drawing board to create ctrlX Automation, a software-driven open automation platform that provides flexibility and scalability through app-based functionality.
Aaron Hand
Jun 4th, 2020

Sixty CPGs were interviewed for a new sustainability report by PMMI Business Intelligence. They had much to say about machines, materials, new formats and sustainable initiatives, as well as what they need from suppliers.
Kim Overstreet
Jun 1st, 2020