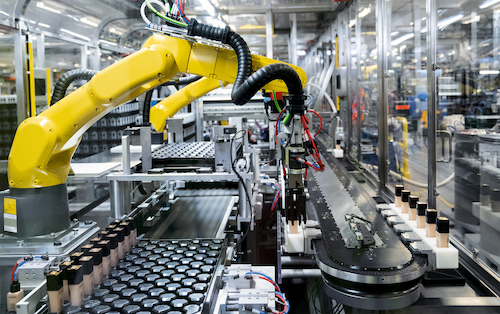 The highly compact XTS has a circumferential track length of 22 m and uses a total of 40 independent movers. The L’Oréal Group produces high-quality skin care products, mascaras, and foundation makeup for its Division Luxe.

In its Caudry plant in the north of France, the L’Oréal Group produces high-quality skin care products, mascaras, and foundation makeup for its Division Luxe. Faced with trends such as increasing individualization and smaller production quantities that present challenges in the growing luxury segment, the L’Oreal managing board set the strategic goal to make the company’s production operations more agile. That’s why three production lines in the plant are based on the Beckhoff eXtended Transport System (XTS). One of these lines is the new Agile F24 filling and capping line for the production of foundation makeup, a system that combines fast format changes with increased output.

Previously, the line on which these products were made consisted of multiple machines from different vendors that were connected in a conventional material flow by way of conveyor systems and product buffers. But its lack of flexibility meant that it was no longer able to support the growing bandwidth of product variants and the cost-effective production of increasingly smaller lot sizes. That’s what led to the development of the Agile F24 line, a fundamental realignment that accommodates the production of all formats while also permitting rapid changeover.

The new line was planned by a L’Oréal team of nine under the leadership of Franck Lefort, project manager at the Division Luxe. The system specifications were developed in cooperation with machine builder Secad   Following an evaluation, the parties decided to replace the existing machines with a single line based on the intelligent transport system XTS.

According to Lefort, the biggest challenge of the new implementation was to make the overall production process independent of rigid machine cycles. “While we previously solved this problem with conveyors and product buffers between the machines, one of the key advantages of the XTS lies in the individual control of the movers,” says Lefort. “This capability enables machine cycles to be decoupled from the duration of individual processing steps, for example, by installing multiples of the more time-intensive processing stations along the transport route to function simultaneously. This optimizes material flow and improves productivity.”

For video footage of the Agile F24 line, go here.

The new system layout is based on an XTS with a circumferential track length of 22 meters and with 40 movers as its core element. The various stations for filling the foundation containers are arranged along the intelligent transport system. The filling process includes six work steps: infeed of the bottles, filling, adding dispenser pumps, adding caps, labeling, and outfeed of the finished products.

Infeed occurs via a handling robot that, like other robots in the sophisticated line, is a Fanuc robot. It takes two or three empty bottles from a tray and places them into transport pucks fastened on the movers. In the following stations, robots or handling systems fill the bottles, insert dispenser pumps or droppers (depending on the product), screw them on, and place a cap on top. 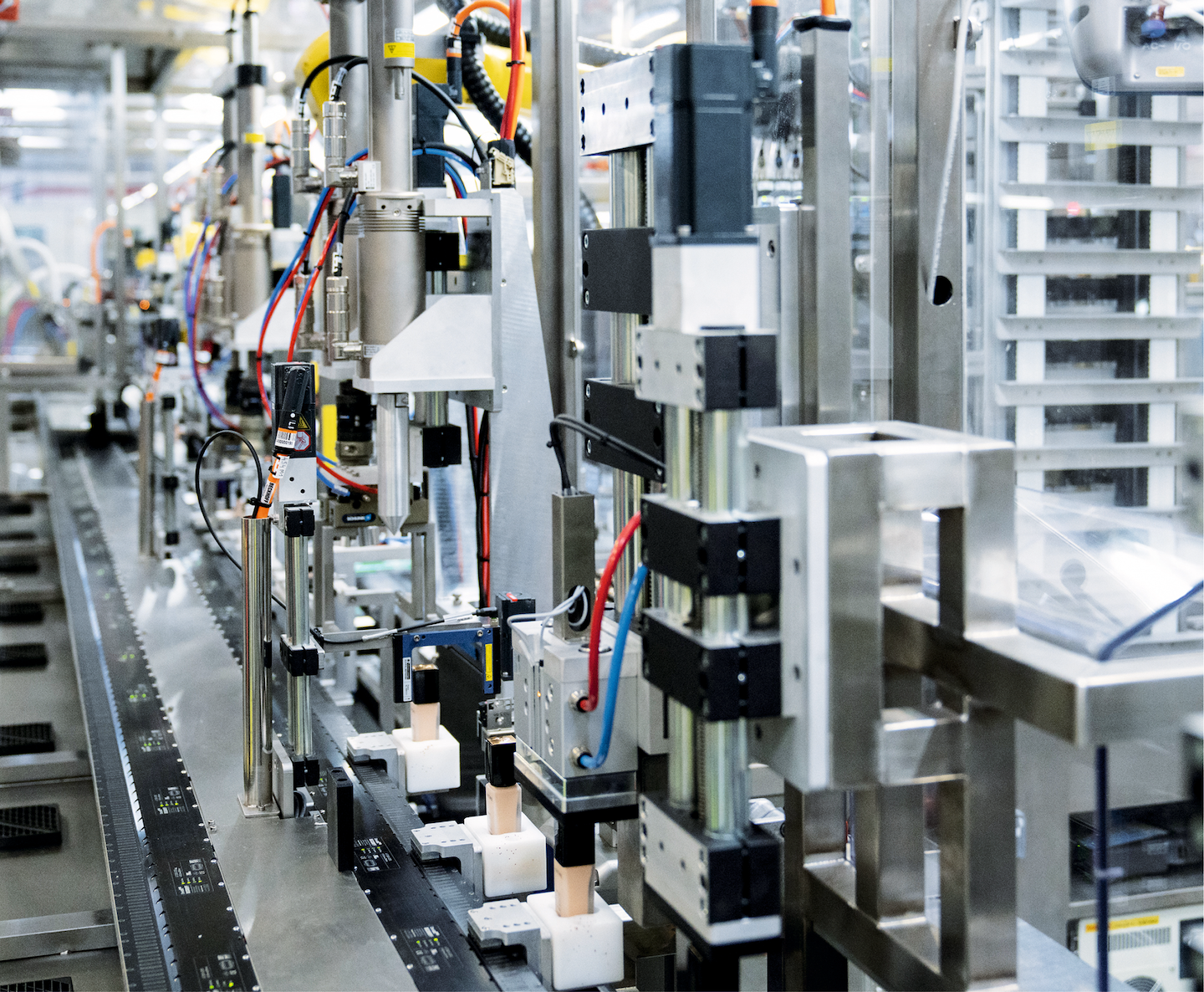 The Agile F24 line employs a total of 39 AM8000 series servomotors from Beckhoff, here in a handling station that closes the bottles.Next, a laser code with the product color, lot number, and expiration ate is printed on the bottle and a label is applied. At the end of the XTS circuit, the filled bottles are placed onto trays and forwarded to a cartoner.

A key advantage of the XTS is the individual control of its movers, with each bottle transported through the processing stations by a single mover. Depending on the required processing time, the mover is able to stop for as long as it takes to execute an action and then carry its bottle forward in the direction of the next process step. This eliminates the necessity to execute differently timed processing steps on separate machines and to provide complex interfaces and product accumulators between them. Instead, the XTS integrates the previous five machines into a single system.

Through this integration and the compact design of the XTS, the system footprint was reduced by 30%. In combination with the increased throughput of the system, the productivity per unit area was increased significantly. This means that L'Oréal will be able to meet the increasing demand for luxury cosmetics in the future without having to expand its production floor area. The resulting investment security is also protected by another key benefit of the XTS, which is increased flexibility.

Through Beckhoff’s software-based TwinCAT control, the XTS can switch between different product variants by means of the corresponding parameter sets. This capability makes it possible to process different formats on a single line instead of having to use several machines. Another benefit is provided with regard to the production of minimum lot sizes. “In terms of flexibility, the XTS is the core of a new solution that allows us to switch to another color within seconds,” says Jean-Yves Vey, plant manager at the Caudry site. “This means we can both reduce lot sizes and meet changing customer requirements.”

The time needed for format changeovers was cut in half and the system availability was increased. The same line can now produce lot sizes ranging from a few hundred to millions of pieces as well as seven different format types with only 40 instead of 300 transport containers. Vey also recognizes other advantages of the TwinCAT-controlled XTS in connection with quality assurance.

“The centralized control principle of the XTS system makes operation, and quality management tasks in particular, much easier,” he says. “These include sample removal, running the line empty if necessary, and check-weighing. All these tasks are fully automated including RFID support.”

In addition to the XTS, further automation tasks are implemented in TwinCAT, resulting in a uniform and centralized control platform for the entire system. Such tasks include

• HMI based on TwinCAT

Additional Beckhoff components used in the Agile F24 line include the space-saving high-density (HD) EtherCAT Terminals installed in the control cabinet and the IP67-rated EtherCAT P I/O modules. The EtherCAT P components, which can be positioned close to the various sensors and actuators, transmit communication and power via just one cable, which simplifies wiring considerably. 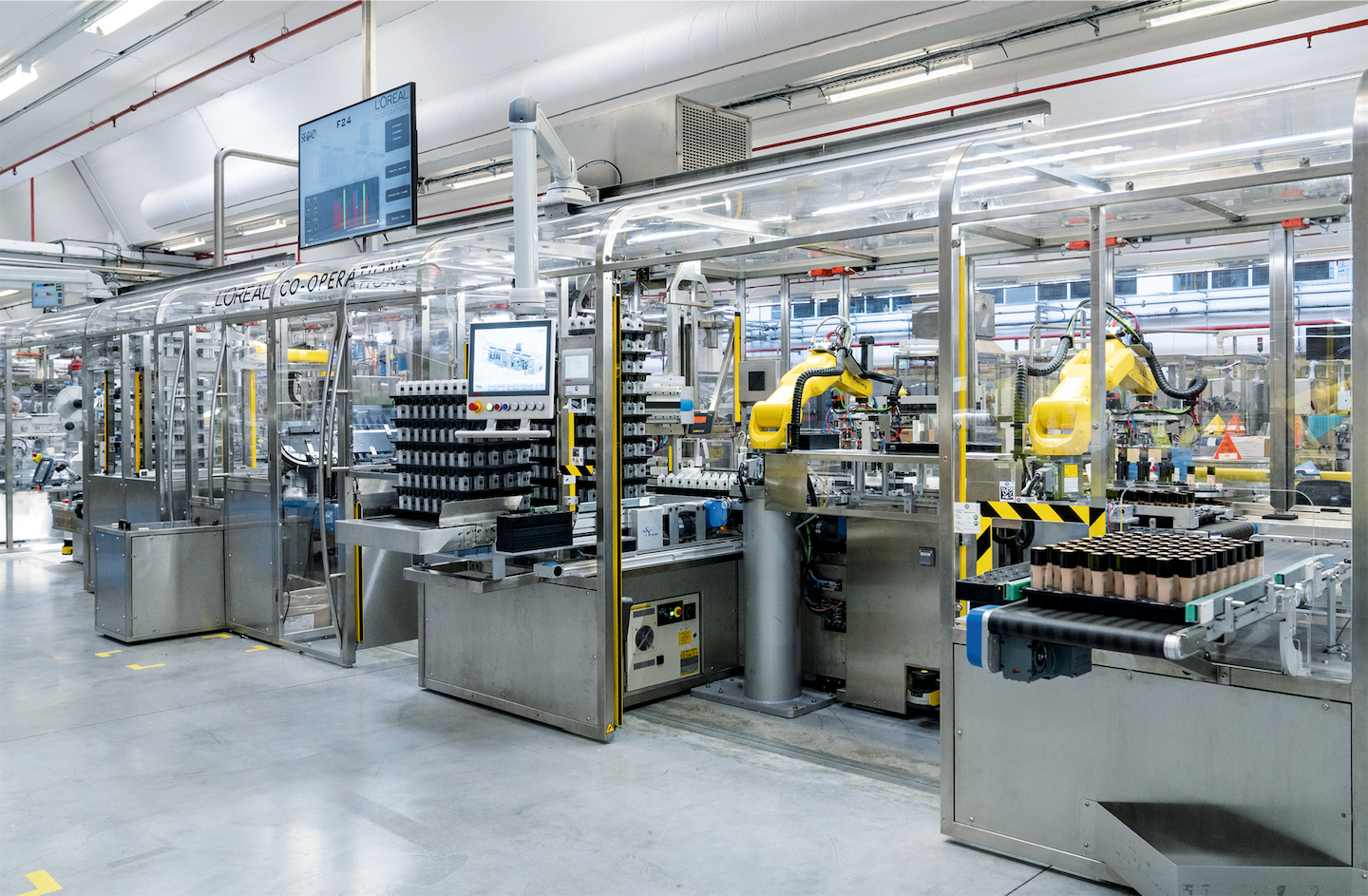 Beckhoff also supplies 39 servomotors from the AM8000 series for the system installation, which together with EL7211 EtherCAT servomotor terminals or AX5000 Servo Drives serve as drive axes in various handling devices. Here, too, One Cable Technology (OCT) reduces cabling requirements significantly by transmitting power and feedback signals over a single standard motor cable.

With the help of XTS and PC-based control, L’Oréal and Secad developed a future-proof production line for the flexible manufacture of cosmetics that meet high quality requirements and new consumer expectations. Operators can control the entire process, including all quality checks and sampling, on their own, and they can execute format changeovers quickly and easily. After this initial success, the L’Oréal Group decided to continue its cooperation with Beckhoff in a long-term partnership to implement more of the modular and agile production lines.

New solutions for Industrie 4.0 and IoT

Trying to keep up with productivity, quality, safety, sustainability, and other industry demands, food and beverage plants are turning increasingly to the innovations found in today’s sensor instrumentation.
Aaron Hand
May 19th, 2020

The proliferation of digital protocols has made it easier for producers to get the information they need from their instrumentation. Sensor suppliers explain why IO-Link is gaining particular traction.
Aaron Hand
May 18th, 2020

Economic Outlook: 2020 and Beyond

Personal care and pharmaceuticals /medical devices are two markets that, not surprisingly, are holding their own and even expecting growth during COVID-19.
Kim Overstreet
May 15th, 2020

Just like all change management, total cost of ownership is a journey that has transformational results when successfully implemented.
Stephen Schlegel
Bruce Larson
James Couch
May 14th, 2020

Machine Efficiency and the Impacts of Sustainable Packaging

Anti-pathogenic packaging, disruptive structural formats and graphic design that responds to the exponential growth of e-commerce in Latin America, and new approaches to sustainability in packaging will drive the future post-pandemic.
Lilian Robayo
May 11th, 2020

Sustainable Package Reformatting on the Rise

According to a new report by PMMI Business Intelligence, over half of CPGs are changing product packaging to meet sustainability goals by moving from one format to another.
Kim Overstreet
May 8th, 2020

Following a major corporate rebranding, the food and pharma packaging OEM launches its first virtual show as a platform to introduce new products and interact with customers.
Stephanie Neil
May 7th, 2020

NCC's Kevin Mauger offers UnPACKED with PMMI podcast a reassuring voice in a sea of uncertainty.
Sean Riley
May 7th, 2020
More in Home

COVID-19 Brings Increased Visibility to the Role of Robotics

Presidents and CEOs of Fanuc, Universal Robots, Fetch, and Schunk discuss how robotics and automation are helping manufacturers through the pandemic and what the lasting effects might be.
Aaron Hand
Apr 28th, 2020

Global Impact of Covid-19 on Manufacturing

Three CEOs of leading manufacturers of packaging and processing machinery and equipment met virtually with PMMI to discuss strategies in conducting their operations amid the pandemic affecting today's world.
Lilian Robayo
Apr 27th, 2020

Packaging methods and machinery must not be overlooked as vital components to a sustainable packaging strategy.
Kim Overstreet
Apr 21st, 2020

Pet Food Processing and Packaging Machinery of the Future

The agency’s vision is based on three fundamental tenets: It must be people-led; it should be FSMA-based; and solutions should be technology-enabled.
Jeffrey T. Barach
Apr 15th, 2020

The plan, called NAM (The National Association of Manufacturers) Health Care, was developed to meet the unique health care needs of manufacturers. It will offer a portfolio of health benefits options insured by UnitedHealthcare.
Sean Riley
Apr 14th, 2020

WPO: Packaging During a Pandemic

WPO's Pienaar shares his views on the role of packaging in a pandemic
Lindy Hughson
Apr 14th, 2020