Find out how Oronde Vassell is elevating this packaging OEM's online presence and profile. 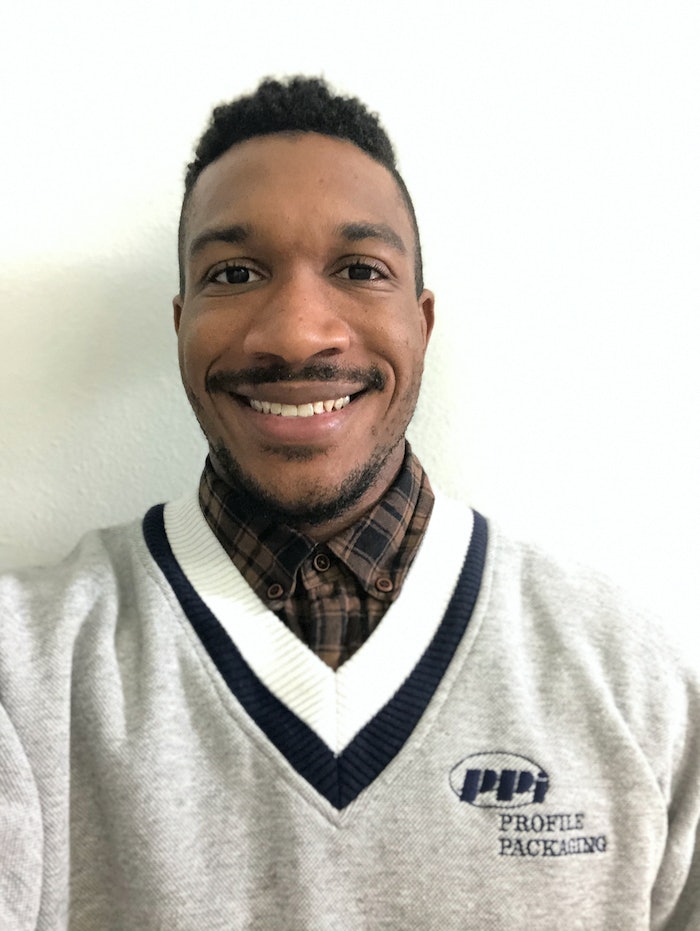 Oronde Vassell joined the Navy after he graduated from Liberty University where he was also a Division I track athlete. It’s family tradition to enter into the military, and Vassell always knew that he wanted to serve his country. While in the military for five years, Vassell was a master-at-arms and involved in law enforcement, and then he spent a year deployed in Bahrain in the Middle East taking on anti-terrorism missions. His last tour was on the USS Nimitz—the Navy’s oldest carrier in the fleet. As he transitioned to the civilian sector, Vassell sought after a career in the marketing field, and when he found PPi Technologies (PPiTG), he was intrigued. As the standup pouch, unit dose, tray, and end-of-line equipment manufacturer’s marketing specialist, Vassell balances tradition with innovation as he communicates the company’s story to the world of packaging.

As a veteran transitioning to the civilian sector, what obstacles did you encountered when you joined PPiTG?
The biggest challenge I face, especially being a veteran, is time management. When you’re inside the military, we have everything laid out for us in terms of what’s expected and required of us. For veterans, I think that structure can sometimes be taken for granted. When I first started here, I was very humbled because it was a lot to take in. The company showed immediate investment in me, they gave me a computer, a Polo shirt with the company logo, and everything else I needed to be successful. I think even being young and full of energy, our generation is very proactive, but we can hit slumps and get discouraged. But what really helped me was walking around and talking to different people within my company and learning about the people I work with. Your co-workers may have a trade or a skill that you can learn from by taking that initiative. Our CEO built a bistro, workout room, a mini putt putt course, and game room for us to enjoy. He’s done his part. So now we have to do our part and actually utilize the space to talk and build a community. Seeing how my co-workers manage their time is one way I have been able to learn better time management skills.

In terms of networking and meeting your peers, have you connected with the Emerging Leaders Network through PMMI?
I was selected to be part of the committee, and I am so honored—especially being so new to the industry. I can only be as good as my peers, and I have to learn as much as I can so I can grow. I went to PACK EXPO 2019 for the first time in Las Vegas, and I was able to go to the Emerging Leaders party. I was able to see that there are a lot of us in the field that are young, inspiring, and want to learn and grow more. We’re literally the future with of all of our expertise, whether it’s marketing or mass production, we are the future. So, sticking together and learning from each other to grow and be competitive was interesting.

Speaking of being competitive, you were a division I college athlete, how does that translate to your performance in the industry?
Athletically, the biggest thing is learning how to win in a team. I was a track athlete. So, of course, there’s a lot of individual aspects of it, but there is also a team aspect. We have to pull together and figure out how to win. The question being: How will everyone pull their weight to accomplish the main goal?

And how about being a veteran? How has that helped you thrive in this industry?
Being in the Navy, you learn to understand how to build camaraderie and become a cohesive group of people from all different types of backgrounds. We have machinery from Germany, Spain, South Korea, and other countries, but we all work on the same team. In the military, you work with people from all different walks of life, and knowing that we have a mission to accomplish, following the standard operation procedures, and that knowing that sometimes you need to adapt is where my strong suits lie.

Let’s dive into marketing, what’s your strategy behind your approach to highlighting PPiTG?
I’m the first in this position on the machinery side as far as marketing. And the challenge I had to overcome was that this company is already established. They’ve been in business for 25 years, manufacturing high-quality machine pouches. So, I am constantly thinking about how to effectively tell their story. The platform I wanted to start with was LinkedIn. Being a business to business company, this is the premier platform that will help us get in front of the right people. When I came on board, the company only had about 230 followers, which is still pretty cool, but I made it a goal of mine to boost that to 500 plus. I knew we may not be able to achieve it before the year was over, but I felt like the more followers we had, more eyes, and more impressions, that would be a step in the right direction. My main goal was to build a loyal audience base that’s always trying to tap into what PPiTG has going on. We had a sales meeting a couple of weeks ago, and we had just hit more than 500 followers on LinkedIn. It was a great feeling to know that I was part of the team to get the account there. It’s not what it used to be 25 years ago you know, we have customers that make their decisions all online. So, having that presence makes us proactive. I’ve also been working on the website, and we are creating more videos, too.

How is PPiTG using videos to attract new customers?
There are a lot of limitations around videos at the moment as sometimes our vendors don’t want a certain thing to be exposed yet because it’s an innovative idea. But once we get the green light, what we do is upload it to YouTube, and we will link it to LinkedIn and Facebook. So, this year, it’s my goal to grow our audience and content on YouTube.

What are some packaging and industry trends you and PPiTG are currently adapting to?
Since we also manufacture stand-up pouches, sustainability is a big focus for us right now. Our CEO, Charles Murray, is always thinking about the future and leaving a green earth behind. We are constantly working with different types of universities on research. At the University of Florida, they are thinking about how we can get rid of trash and things that are going to be an issue over time, and we are paying attention to what they are doing so that as a packaging company we can be a part of the solution, not the problem.

Attract and Retain a Quality Workforce, Insights with Gardner Carrick at PMMI’s ELC

NAM and MI programs and research bring information into labor outreach efforts and retention of a diverse, quality workforce.
Melissa Griffen
May 10th, 2021

Bumble Bee CEO on Leadership, Market Changes, and the New Role of OEMs

Rick Nuñez Embraces All Aspects of the OEM Business

Adam Rosenthal was appointed to the new position of Director of Marketing, Pharma business line for ProMach.
ProMach
Feb 9th, 2021

Lisa Hunt was appointed CEO of Plexpack Corp. effective January 5, 2020. She will take over from Paul Irvine, Owner and Chairman, who has dedicated and cultivated the company over his 29 years tenure.
Plexpack
Jan 5th, 2021