Find out how American-Newlong adapted its equipment to solve a workforce problem for its customers and enter new markets. 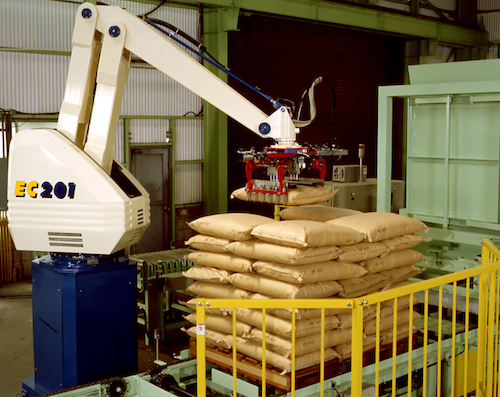 Salt, pet food and grain manufacturers located in rural regions have usually had access to an abundant talent pool of teenagers on summer break, whose job was to load 50 lb. bags onto pallets. But recently, these manufacturers have had difficulty in finding employees to fill these manual labor positions due to the weight of the bag, duration of the shifts and the urbanization of rural areas—which brings along attractive job opportunities for teens who would rather work in fast food restaurants, coffee shops and retail stores.

Many of these rural manufacturers get their equipment from American-Newlong, a maker of filled bag sewing machines, automatic bag heat sealers, bag making machines and semi-automated and automated bagging equipment. So naturally, Gary Wells, the president and general manager of the Indiana-based OEM, noticed that some of his customers were facing a dwindling workforce. To mitigate this, Wells began looking at ways he could offer an automated palletizing operation that would seamlessly work alongside many models of his bagging equipment, which process up to 32 bags per minute.

There are many ways to palletize, but high-level palletizing is one of the more common routes taken, Wells says. High-level palletizers take up quite a bit of space and they have a lot of moving parts, which add up when it comes to support and service down the road. And while searching for a solution, Wells determined that a high-level, high-speed palletizer may alienate his current customer base. He opted, instead, for a robotic palletizing operation because he wanted to be able to offer automation at a cost-effective price point and a small footprint. A robotic palletizing solution would also allow Wells to sell his equipment into new markets—for example, farms that are also highly impacted by the shrinking talent pool, but don’t have much space for a high-level palletizing system.

As Wells narrowed in on the equipment specs he needed, he took his search international. American-Newlong is the North American branch for Tokyo-based Newlong Machine Works Limited, so he consulted his parent company to find a supplier that could match the OEM’s global reach. Wells was then pointed to the Fuji Ace robotic palletizer from Japan-based Fuji Robotics.

“Our Asian group has been using Fuji Robotics for decades,” Wells says. “This robot is rugged and simple, which is exactly what we need because our application is also very simple. I didn’t need the robot to go a bunch of different directions or handle multiple, various tasks. They were the one to go with.”

“We realized that Fuji Robotic equipment could save us a lot of space, while other high-level palletizers would eat up prime real estate in some of the smaller facilities we sell into,” Wells says.  “The footprint is so small, and it opened up a whole realm of applications and places that weren’t even feasible to palletize in the past.”

Wells says another selling point was that the robot didn’t require extensive maintenance because if anything went wrong on the equipment there are only a few mechanical components, such as grippers, bushings and bearings, that could easily be replaced, and the rest of the robot’s operation relies on software.

Aside from being able to break into untapped markets, American-Newlong has been able to establish a partnership with Fuji Robotics that allows the company to manufacture and sell the robot arm separately from its own line of baggers. The deal has also provided American-Newlong the opportunity to gain access to existing Fuji Robotics customers that are in the market for bagging equipment.

“We are unique being worldwide and Japanese based,” Wells says. “We have long standing relationships with Fuji Robotics in other parts of the world with our other companies. The robots have been the most reliable, and Fuji Robotics takes the time to learn and understand what we do and how our product lines can mesh together.”

Robotics Industry to Shift from Fixed Automation to Mobile Systems

New market report forecasts that of the 8 million robots that will be shipped in 2030, nearly 6 million will be mobile.
Anne Marie Mohan
Jan 4th, 2020

Soft Robotics' mGrip can be assembled in as little as one minute.
Sep 26th, 2019

The intuitive program enables the robot to connect the dots without programming. Plus, a sneak peek at the HC20 20kg cobot.
Sep 26th, 2019

The IntelliFlex feeder is integrated with robots and vision, while the VT6L robot reaches up to 900 mm with a payload up to 6 kg.
Sep 24th, 2019

Cognex's Data Man 374 with torch light leverages high-speed liquid lens with a distance sensor built in to focus on the fly.
Sep 23rd, 2019