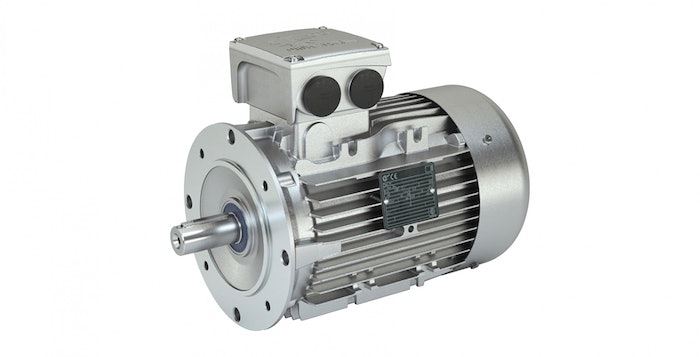 Nord's new 3- and 4-hp premium efficient motors offer a simplified assembly, including the elimination of a copper rotor, as the motors produce the same energy efficiency without it. This change results in reduced costs. Not changing in the design are the outer dimensions and the mounting options available—direct mount, NEMA, and IEC, making the new motors drop-in compatible for existing systems. While the new motors will be the preferred offering beginning Q1 2022, legacy versions are not being immediately discontinued and will still be available for a period.

The exterior of the motors has new curved cooling fins that have been adapted in depth and shape. These fins curve around the terminal box and the motor to enhance airflow and optimize cooling. Sharp edges and corners have been removed from the terminal box to smooth the design and provide easier maintenance. The need for NPT adapters has been eliminated, as there are now directly integrated imperial and metric conduit connections for ease of use and reduction of parts. Additionally, curved feet on the new design give the motor greater strength, stability, and a streamlined appearance. The fan cover has also received an updated radial design and the screws of the hood have been rotated by 45 deg, making them accessible in case a variable frequency drive is installed.

Along with visual updates, the 100 frame motors have several mechanical updates, such as an optimized rotor fan assembly and encoder installation. The rotor fan has been designed with a quick-click mechanism for simple install or removal, making maintenance and replacements fast and easy. The incremental encoders have full impact protection and improved torque support added to the bearing shield. The encoder position itself has been moved between the fan and the B-end bearing shield. These assembly changes result in protection against mechanical influences and better cooling of the motor, as the encoder is not blocking the fan inlet. In addition to moving the encoder position, retrofitting of encoders is now possible, and with the aid of a plug-on shaft, incremental encoders can easily be retrofitted to a standard motor without replacing or reworking the rotor. Special options, such as a CAN-based absolute encoder, hand wheel, and cast-iron fan, are available for configuration.

Following its success in international industrial markets, CoreTigo expanded into the North America market with the opening of a USA-based entity and office, CoreTigo Inc., in Grand Rapids, Mich.
CoreTigo
May 18th, 2022

Newtec’s 2008PCM Mini Weigher is designed for accurate, high-speed weighing of a variety of processed food products such as fresh and dried fruit, snacks, and frozen foods.
Newtec
May 6th, 2022

Couplings from JW Winco transmit rotary motions and torques from shaft to shaft and also even out tolerances and mechanical deflection that would otherwise result in damage to drive or measurement configurations.
JW Winco, Inc.
Mar 16th, 2022

He will replace the current CFO, Tim Gasparich, who is retiring. As CFO, Blassick will be responsible for overseeing and analyzing Triangle’s finances and helping provide a vision for the future and plan for scaling Triangle’s business.
Triangle Package Machinery Co.
Feb 23rd, 2022

The handbook will support designers and engineers with the largest selection of standard parts. It lists more than available 75,000 standard parts.
JW Winco, Inc.
Feb 18th, 2022
More in Supplier News