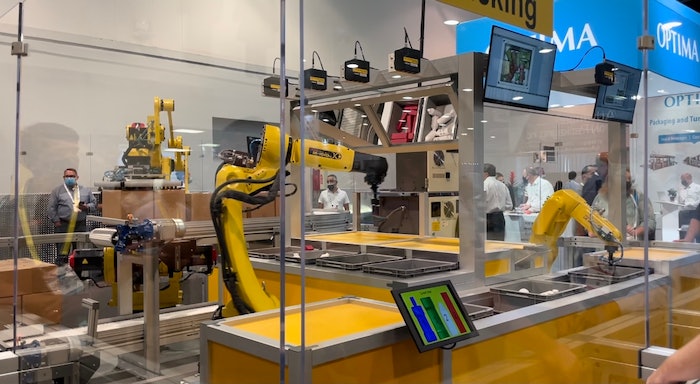 FANUC America, a supplier of CNCs, robotics, and ROBOMACHINEs demonstrated a wide range of automation solutions for picking, packing, fulfillment, and palletizing during PACK EXPO Las Vegas in booth #1441.

FANUC’s CRX cobot is an easy-to-use and flexible solution for a variety of applications, including palletizing, packing, inspection, and more. Built-in sensors on each axis can allow the CRX cobot to work safely alongside people without the need for expensive guarding. In addition, the CRX can operate for eight years maintenance-free.

At the show, a FANUC CRX-10iA/L equipped with an iRVision 3DV/200 vision sensor demonstrated case palletizing. The CRX used the 3DV sensor to find a box, pick it up from one pallet and place it on another pallet.

The CRX collaborative robot offers the same level of performance. It supports several of FANUC’s features including iRVision and is a perfect fit for any application where collaborative robots can help customers achieve higher efficiencies. Also, interactive programming enables users to teach points using hand guidance or a new tablet interface with drag and drop icons.

The second SCARA demonstration featured the FANUC SR-12iA robot with the Environmental Option packing and unpacking bottles of mouthwash. This option includes white epoxy coating, bellow covers, anti-rust bolts and seals, and an IP65 rating to withstand dust and liquids.

The small SR-3iA and SR-6iA SCARAs have a compact footprint and space-saving design for maximum efficiency. In addition, the SR-3iA/H and SR-6iA/H are 3-axis variants that provide strong performance and an affordable alternative to small linear slide products. The higher-payload SR-12iA and SR-20iA robots provide flexibility with a large vertical stroke, and an Environmental Option for harsh conditions. All of FANUC’s SCARA robots include exceptional robot motion, speed, and precision.

Powered by the R-30iB Compact Plus controller, FANUC’s SCARA robots have the same intelligence and reliability that’s available on all FANUC robots, including integrated iRVision, conveyor tracking (iRPickTool), and most other software options. FANUC’s latest SCARA iRProgrammer user interface makes it easy to setup and program the robot on a Tablet or PC (Teach Pendant is optional).

A powerful four-axis design and higher wrist inertia allows the DR-3iB/8L to handle 8kg payloads at very high speeds. Improved repeatability maximizes accuracy, and a hollow wrist design keeps all gripper wires and piping tucked inside. In addition, a large work envelope featuring a 1600mm reach (500mm height) is ideal for applications that require more range such as reaching into tall boxes or handling product on wide conveyors.

At the show, an M-10iD/12 robot creates random orders by picking from four homogenous totes, each with a 3DV/400 vision sensor mounted overhead. Each of the four sensors provide “best pick” locations from the homogenous totes, and then the robot picks parts to fill a customer order. Once the order is complete, the order tote will move to an LR Mate 200iD robot station also equipped with a fixed 3DV/400 to remove the parts from the bin for further order processing. The demonstration highlighted how the use of fully integrated robotic 3D Vision is an ideal solution for applications in the warehousing, logistics and e-commerce markets.

The 3DV/400 Vision Sensor is lightweight and can be used as a fixed or robot mounted 3D Vision camera. The 3DV/400 offers single snap 3D image acquisition enabling faster bin picking and the ability to perform applications such as line tracking. Compared to conventional 3D vision sensors it provides better acquisition of shiny parts and offers a solution for glare caused by reflective parts. The 3DV/400 is part of FANUC’s iRVision suite of fully integrated and complete machine vision products for robot guidance and inspection. FANUC designs all of the hardware and software specifically for FANUC robots, providing our customers with solutions that meet their production needs.

The M-10iD robot series includes four compact material handling robots—the M-10iD/12, M-10iD/10L, M-10iD/8L and M-10iD/16S. Rated best-in-class for speed and repeatability, the M-10iD robots offer a sleek and lightweight design and feature internal cable routing and a curved J2 robot arm, minimizing interference with work pieces and fixtures.  The robots’ payload capabilities range from 8-16kg, allowing them to handle a variety of products.   In addition, a long reach (1103mm to 2032mm) and stroke—even in the backflip region—makes it easier for customers to apply the robots while maximizing their available workspace—including larger parts or tooling.

The LR Mate 200iD series of tabletop industrial robots offer a “best in class” work envelope for both upright and invert mount installations. Ten models include clean room and wash proof versions, each with various wrist speeds and reaches to accommodate even the most limited workspace.

At the show, the M-410iC/110 robot picks cases from two conveyors and palletizes mixed layer unit loads. Attendees can select from a preset number of unit loads using an Allen-Bradley HMI screen. Once selected, the HMI displays the unit load and the robot palletizes up to three layers. The demonstration shows how easy it is to change layers on the fly. Finally, the robot depalletizes the cases, and the cycle repeats.

The system highlights FANUC’s latest PLC Motion Interface option designed to enable palletizing operators to program homogeneous or mixed unit loads using FANUC Add-On Instructions (AOIs). This helps simplify the deployment of FANUC robots into facilities with operators that have no robot programming experience but are familiar with Rockwell PLCs.

The M-410iC/110 robot is designed for high-volume case, bag, and bottle palletizing operations.  It features a 110 kg payload, four-axis articulation, a compact footprint, and a slim arm with through-arm cable routing to simplify dress-out and minimize interference with tooling and other peripheral devices. The ability to perform 2200 standard palletizing cycles an hour with a 60 kg payload makes the M-410iC/110 the fastest palletizing robot in its class. It also features a compact footprint and a 646 mm interference radius, ideal for tight workspaces.

See what our PMMI Media Group editors had to say about exciting new technology and machinery that they've seen on the show floor day three during the 'Daily Download' at PACK EXPO Las Vegas.
Oct 8th, 2021

A wide variety of CPGs can benefit from the AccuVeyor AVL from AmbaFlex, a dynamic accumulator that allows for the absorption and release of items between processes without any interruption, with true first in/first out accumulation functionality.
Matt Reynolds
Oct 7th, 2021

The new Mespack HF Series, a fill-through spout solution for pre-made pouches, continuously fills through so that there is no wave effect and up to 15% of the headspace is reduced. Mespack partnered with Hoffer Plastics Corp. and UFLEX Group.
Natalie Craig
Sep 29th, 2021

B&R is highlighting two of its unique transport systems, both of which allow for batch sizes of one.
David Miller
Sep 29th, 2021

The in-filler technology allows for automated inspection of lids to ensure they are properly sealed.
David Miller
Sep 29th, 2021