Economic Outlook: 2020 and Beyond 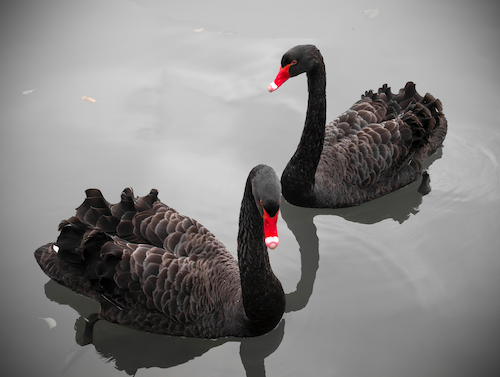 What is a black swan event? According to Investopedia, “A black swan is an unpredictable event that is beyond what is normally expected of a situation and has potentially severe consequences. Black swan events are characterized by their extreme rarity, their severe impact, and the widespread insistence they were obvious in hindsight.”

Chausovsky said we are in the midst of an economic double black swan due to the following events: one is COVID-19, government response to the pandemic, and the resulting effect on the economy over the next several years; the second is the collapse in oil and gas prices resulting from the conflict between Saudi Arabia and Russia which resulted in a “massive disconnect” between supply and demand fundamentals in the oil market.

Regarding the pandemic, Chausovsky said, “We're just seeing some early signs of improvement and we're hoping that these downward trends continue in the weeks and months to come.” If the assumption is correct that moving into the third quarter there will be some thawing of economic activity as the worst of the virus is behind us, Chausovsky said, “People will start to feel more comfortable getting out and spending money in businesses.”  Also, as activity levels rise and consumers venture out more – and drive more – some of the “downside pressure” we’ve been seeing on oil prices will be alleviated.

The government response to the pandemic in the form of stimulus payments and the CARES Act provisions will also “mitigate some of the downside pressure on the economy, both from COVID-19 and from the collapse in oil and gas prices that we've seen,” said Chausovsky. He warns, however, that it will take three to six months for the impact of the stimulus to work its way through the economy, but that the “thawing out of economic activity” should occur in tandem with the positive impact of the stimulus response.

What does this mean to the packaging industry? While some have seen orders delayed or even canceled for new equipment, others are dealing with a surge in activity because they're producing “full out” in the food sector, in the pharmaceutical sector, and some of the home-goods related sectors.

Chausovsky presents detailed statistics supporting his forecast which are available in the webinar, but the bottom line on the forecast for the GDP is that it is not expected to bottom out as low as the 2008-2009 Great Recession, and there should also be a quicker rebound in economic activity due to U.S. consumers being in a stronger position heading into this black swan induced recession than they were heading into 2008-2009.

“We're seeing economic activity all the way into the second half of 2021 before we get back into similar levels of activity that we saw back in 2019, before the onset of the black swan induced recession,” said Chausovsky.

“The sun will rise again, your business will see growth again…that's probably not going to happen over the next 12 months, but it's certainly going to happen 18 to 24 months from now,” said Chausovsky. “ I want to make sure that you realize that you've got to find this middle ground between cost cutting initiatives and belt tightening and investing for the future of your company.”

“We are seeing some interesting shifts in consumption patterns emerge,” he said, “and those shifts are going to be helpful for making sure that the downturn in the packaging industry overall is going to be mitigated, or not as severe as what we are seeing in some of the more traditional or heavier industrial markets.”

For example, a decline of 25% in restaurant sales was offset by a 27% surge in grocery store sales. “So, said Chausovsky, “we are still finding ways to spend money. We're doing it through different channels, we're doing it in different means, but the consuming nature of the U.S. population is still intact.”

“So, prepare yourself,” he said. “Buckle in for a prolonged period of recovery. There's going to be a lot of things that need to happen. Basically, what we're saying is the amount of time that machinery, existing infrastructure, and our current capacity is used up to meet current levels of demand, needs to recover before we ever start to see new orders for big equipment, including large packaging equipment.”

“Certainly, I want you to temper your expectations in terms of new orders being robust this year, or even next year, or into 2022. The total level of investment won't recover until after 2022.”

Chausovsky has a number of takeaways to getting through this period:

Cash is King - “First and foremost, you've got to make sure that your cash flow modeling is reliable. Not only in the near term, but when you look towards Q3, Q4, and into early 2021 as well. If you are projecting that cashflow and you're falling short of where you need to be, then you've got to be making sure you take advantage, not only of the government stimulus packages, but also of lines of credit that are available to you. Make sure that that relationship with the banker is solid and they know exactly what your needs are, so that they can come and meet you at that crossroads.”

Relationships - “You have to think about both your suppliers and your customers - how they are doing from a financial perspective. I speak to clients a lot of the time that have not taken the step of actually looking at the customer base and trying to understand on a case by case basis where their customers are. Which ones are likely to continue to make payments on time? Which ones are likely to be facing difficult times, and are going to ask for the payment terms, or perhaps delaying their orders, or canceling their orders all altogether? You also have to be thinking about your suppliers from that perspective as well. It's absolutely critical to know where the vulnerabilities are in your supply chain, and then actually making proactive moves to address some of those vulnerabilities.”

Flexibility - “How do I pivot? Because at the end of the day, as a decision maker, as a leader in your business, it's all about resource deployment. Your sales effort, your marketing activities, your promotions that you run. You've got to target the end segments that are going to be most receptive to those moves and will give you the best ROI moving forward.”

Measure - “Finally, make sure you're tracking your own performance. Because a lot of time, the unique circumstances of your business are going to mean that your performance is different, for any number of reasons, than the industry overall, and certainly different than the macro economy. You've got to know where your rates of change are and understand when you're going to be hitting that low point so that you can take the appropriate steps to then take full advantage of that next rising trend.”

Chausovsky also offers tips to focus on profitability: “Have you reached out to your shipping and logistics firms and renegotiated those contracts to realize some of the benefits of lower gas prices? Have you contacted some of your suppliers and said ‘Look, copper, steel, aluminum…all of my input materials are substantially lower today than the last time that we signed our contract with you. What can you do for me from a price break perspective?’"

“Just because your top line revenue is under assault right now, that does not mean that you have to give up profitability as well. That's something that is more in your control and you certainly should be implementing actions that will protect your profit margins, and possibly even allow you to grow some of that profitability by playing off of some of these declining costs. Both of those things are going to be vitally important in the weeks and the months to come.”

Chausovsky sees opportunity, as well, that will arise from the supply chain vulnerabilities that have been exposed during this period. “Companies are aggressively moving to develop alternate sourcing of components and materials. And we believe that this new sourcing trend will continue to pick up steam, not only in the short term, but over the entire decade of the 2020s, which will create some really interesting opportunities for you. We believe that there will be new business formation as companies seek to fill holes in existing supply chains. We believe that this means that both your existing and potential new customers could be identified and then brought into the fold, but you've got to devote resources. You've got to devote people, time, marketing, and sales efforts to identifying any of these new near-sourcing enabled, alternate-sourcing related businesses. And then aggressively pursue those opportunities. Because we think that this is going to be good for North American manufacturing overall over the next 10 years.”

To see the webinar in its entirety click here.

Symbiosis for OEMs and Manufacturers

Strong relationships can enable both to prosper as OEMs broaden their scope and educate manufacturers about fast-moving and complex automation advancements that they may not have the time or resources to stay informed about.
Kim Overstreet
Sep 2nd, 2020