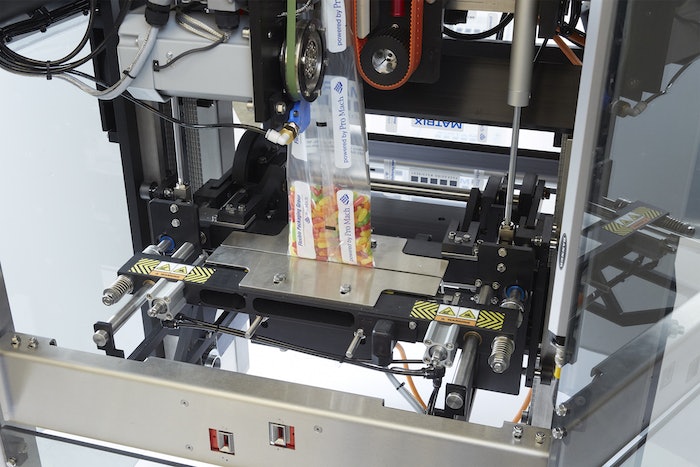 A lot has changed since Marc Willden and his brother Marcel built the first Matrix intermittent vf/f/s machines out of their garage in the late ‘80s. Then fledgling Matrix now occupies a 42,000-sq.-ft. facility in Saukville, Wis., having used a cost effective, flexible machine reputation to grow in the crowded vf/f/s marketplace. Those 20 years of expertise caught the eye of Pro Mach (Cincinnati) executives, who saw the company as a strong fit for its Flexible Packaging Group and acquired Matrix in 2011.

Continuing the company’s constant evolution in 2013, Marc and Marcel developed product strategy and specifications for a solid continuous motion vf/f/s machine to scratch an industry itch for more flexibility in units per minute, optimum product flow, and higher quality packaging. The rotary jaw machine, called Metis, was the industry’s first vf/f/s machine to operate both intermittently and continuously, according to Marc.

Looking forward to next-gen
With a successful foray into the larger world of continuous motion vf/f/s under his belt, Marc became even more sensitive to a frequently cited drawback of that style of vf/f/s—lack of flexibility and configurability. To address this, the Willden brothers hatched their next idea for continuous, this time moving away from rotary motion and thinking of ways to coordinate as many as nine axes of motion at once. The result was Morpheus, which uses box-motion vf/f/s and servo motion control to achieve higher speeds for greater throughput while retaining flexibility and configurability.

“On the surface, it may not seem like a very manic application, but as you dive into it, it really is,” Marc says. “We knew that we would go into this using a number of axes of servos as well as a PLC or an industrial PC.”

As a subset of Morpheus and a nod to the company’s low-barrier-to-entry origins, Matrix also built Apollo, a lower cost, intermittent motion vf/f/s that can be scaled up to include all of the features of Morpheus.

“We designed Apollo with all of the high end capability to begin with and then on the tail end of the project we decided to remove the continuous jaw, put in an intermittent jaw, and reconfigure the machine so that it can function as an intermittent motion machine,” Marc says.

Hybrid model falls short of expectations
While designing Morpheus and Apollo, Matrix leaned on an incumbent automation manufacturer to create a hybrid architecture system using that brand’s logic controls alongside motion control from a different brand. After many development shortfalls, the Willden brothers moved away from the hybrid architecture, seeing the need for one manufacturer to handle the automated equipment.

Shortly after their epiphany, Marc and Marcel narrowed in on Beckhoff Automation’s PC-based control system, equipped with an EtherCAT communications network. Keeping costs down as number of axes, features increase
The cost of automated equipment proved to be more practical, as Morpheus not only has three key operational axes—a horizontal seal jaw open and closure, vertical seal jaw axis, and a film pull—but also an auto setup feature that requires nine more axes, each with its own servomotor.

As Matrix and Beckhoff developed the automation software for Morpheus, they wrote an auto setup module that controls the location of the film pull belts in relation to the forming tube.

“Normally we would spend $2,000 per axis. Multiply that by nine axes and our cost would have been approaching $20,000. Our goal was to get the cost down to $300 or $400 per axis. Beckhoff allowed us to deliver a product that is far more capable, less expensive, and more reliable,” Marc says. “The lower expenses allowed us to create the auto setup function, which none of our competitors have.”

to save and program machine tasks even when the product lines require multiple changeovers. This feature is especially useful in improving performance with difficult films.

Marc also wanted Morpheus to be easily customizable for users, a characteristic of the Matrix brand. So, the company designed the HMI software to be co

Building on modularity, the EtherCAT industrial Ethernet system along with Pro Mach’s ProTech software, allows Matrix personnel to plug in a module and capture real time data from the Beckhoff control system, or push it into the cloud and deliver it to customers.

Though the machine’s controls are from Beckhoff, Matrix also valued Beckhoff’s willingness to provide interoperable components.

“The minute we are locked into buying all components from one manufacturer, we get nervous,” Marc says. “The fact that we didn’t have to use a single manufacturer for every piece of the machine was extremely reassuring. That said, we ended up using mostly Beckhoff after all.”

Morpheus gains traction
While other continuous motion machines are optimized to handle either smaller or larger bags, and don’t handle both efficiently, Marc says Morpheus can handle as many as 200 bags per minute as large as  12 in. wide by 20 in. length, and smaller bags at higher speeds. The machine also runs films that require longer seal times, making it ideal for frozen markets.

To make Morpheus more versatile in this regard, Matrix recently created the polyethylene (PET) version of the machine for frozen food products. Since these machines can be very application-specific, Matrix is developing a library of accessories to accompany the base machine.

“We identified certain options that we had to have right away,” Marc says. “As of today, we can quote all of the options we may need, provided that the lead time quoted allows for a few weeks of engineering for any minor options that may be needed.” Intuitive design leads to simplified operation
One Matrix customer has older machines that run on legacy controllers, but the customer wanted to try out the newer machines, specifically Apollo. Marc was concerned that the machine and user interface were so different from the older machines that operators were familiar with. But Beckhoff and Matrix’s investment into the aesthetics on the Apollo and Morpheus user interface allowed their customers to commission the machine themselves to produce 70 bags per minute before Matrix visited the facility to service the machine. After the machine was optimized, the customer could run as many as 120 bags per minute.

“English wasn’t the first language for many of the operators, but they got that machine up and running without our help because the user interface is so intuitive,” Marc says. “If I was going to get pushback, I expected that was where it would happen, but it didn’t.”