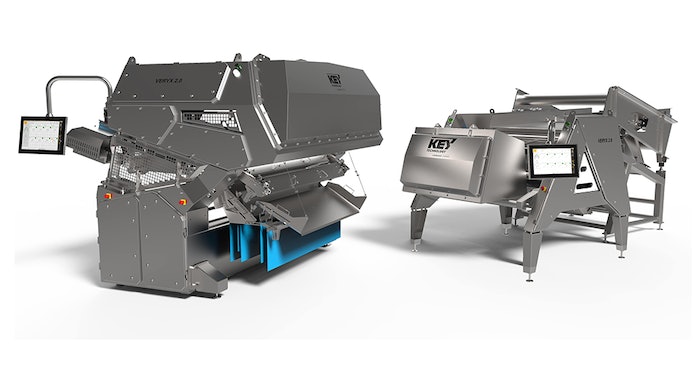 In very aggressive food production environments, the optical sorter is subject to water and other materials splashing against sensors, and debris collecting on the sensors as well as lights, notes Marco Azzaretti, director of marketing at Key Technology. “Over time, the challenge is to operate the same as Day 1,” he says.

The system’s optimized mechanical layout addresses this. The sorter’s architecture houses all utility components within the frame, eliminating the need for an external enclosure. All door seals have been updated to a new patented design, and additional sanitation upgrades further ensure Veryx 2.0 can withstand harsh operating environments over long production cycles.

All new technology for the LED lighting system delivers higher-intensity illumination with less scatter and reduced shadowing effects, Azzaretti notes, improving the sorter’s detection capabilities. The LEDs also have twice the lifetime of previous generations, he adds, which helps to reduce maintenance and energy costs of the lighting system.

On the software side, new AI algorithms are helping to improve Key’s FM Alert monitoring tool as well as its Sort-to-Grade (STG) software. With FM Alert—which sends alerts if foreign materials are found in the product stream and records a time-stamped image of each critical foreign object detected by the sorter—AI techniques help to analyze captured images to further improve the accuracy of its record-keeping. The STG software categorizes every product defect and the dimensions of every object and automatically makes optimal accept/reject decisions based on the target quality spec defined by the operator. Here, AI helps to achieve more accurate dimensional grading of the product by digitally separating clumps of products into distinct objects for evaluation.

Also new from Key Technology is Discovery, a suite of data analytics software that enables Veryx 2.0 and other Key equipment to collect, analyze and share data while sorting product. Because the sorter sees every object flowing through the production stream, it can reveal patterns and trends that improve not only the sorting itself but can also help illuminate upstream and downstream processes.

“Increasingly, customers are using our sorters as information centers for the whole process line,” Azzaretti says. “They’re able to capture more information than just what the machine needs for its core function, and they can provide valuable insights to customers.”

Discovery provides actionable information to help processors optimize product quality, maximize yield, reduce downtime, and minimize labor. As one example, if sorting diced or formed product, the system could detect how the shape profile has changed over time, Azzaretti notes. The system could alert an operator further up the line about a possible problem with the dicer or former.

Azzaretti also points to the ability for customers to use information from detailed quality reports to pay suppliers of raw input. With a pay-for-performance scheme, food processors could pay suppliers based on how clean or dirty the product is, he adds.

Four trends will affect continued growth on EOL machinery through 2026, with the food and beverage industries driving the majority of purchases.
Kim Overstreet
Jan 25th, 2022

Learn Why Manufacturers Should Target Cobots

With the help of a track system from B&R, this Polish OEM is building machines that make it practical for liquid products CPGs, like cosmetics or pharma companies, to plan for short and specialized product runs.
Matt Reynolds
Dec 20th, 2021

Listen as global packaging and processing heavyweights break down how brands develop on-pack messaging that appeals to consumers.
Jan 11th, 2022

Your PACK EXPO East Packaging Vlog returns with the inside scoop on all things packaging and processing.
Sean Riley
Jan 11th, 2022

Is a Retrofit Appropriate?

Retrofits can result in substantial cost savings, and enable an incremental approach to Industry 4.0 initiatives. However, they may not be the correct option in every case.
David Miller
Dec 31st, 2021

New Partnerships for OEMs to Explore in 2022

After PACK EXPO Las Vegas 2021 led the way in bringing the industry together, PACK EXPO East returns to Philadelphia (Mar. 21 to 23) looking to build off of its largest show ever in 2020.
Sean Riley
Dec 14th, 2021

Appointed CEO in January 2021, Hunt has already implemented changes that will prepare the OEM for product and global expansion, while staying true to its roots as a diverse solutions-oriented company with an entrepreneurial spirit.
Stephanie Neil
Dec 10th, 2021

Top Three Operational Priorities of Execs in Packaging and Processing

Issues that were prominent prior to 2020 became even more elevated during the pandemic.
Kim Overstreet
Dec 7th, 2021
More in Home

Metal Contamination Removal Is Key to Success for Toll Processor

The company produces 26 million multipacks each year, and saw an opportunity to transition to more readily recyclable packaging through a partnership with R.A Jones.
Kim Overstreet
Oct 27th, 2021

Serac presented at PACK EXPO Las Vegas a Blow-Fill-Seal solution for yoghurts and desserts in PET/rPET jars. This solution, which combines an SBL linear blow-molding machine and a linear dosing machine, has been named CupBox.
Lilian Robayo
Oct 20th, 2021